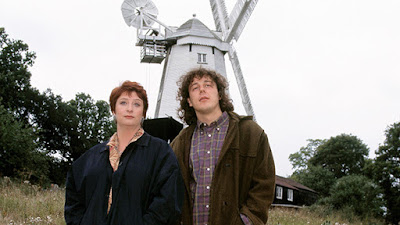 Another of my beloved series which I have never written about here, although the reason is simply that you have to let yourself forget mysteries before you watch them again.  I don't personally watch mysteries really for the detection but for the comfortable setting and the atmosphere. This goes for Agatha Christie, whom I have written about here before - although her books are now old enough to have faded into a mythical past - for example I would love to sympathise about the servant problem, but I have never had that problem myself. I feel Jonathan Creek also has an air of unreality and regular readers will know I love TV shows to be unreal.
It has only just struck me how unreal this is. As I remember it is revealed at some point that Jonathan inherited the mill (although I stand to be corrected) but Maddie's flat in a mansion block would be ridiculously expensive. Out here in reality journalists can't be sure of stability and people who make a living by consulting on their special interest tend to live hand to mouth.
This, as all quality TV, can be read on several levels. The idea which kept coming to me was that it was a story about a woman who had fallen in love with a wrong 'un. Because Mr Spearfish is almost certainly wrong by his wife's standards and really she should have dumped him. That seems to be the opinion of everyone else in the episode who knows them.
As a mystery it is also fairly obvious that the premise is fake. I feel that selling your soul to 'Satan' is the province of rebellious teenagers and for a grown man to do it and also accept his new magical abilities such as being shot in the chest and not being affected. Also - how much chest hair can one man carry without beginning to attract random items through static?
But I'm being mean by pointing to the mammoth plot hole, which is why this is best approached for the atmosphere.
Which is wonderful and Mr Spearfish's story is in counterpoint with Adam Klaus in court for alleged sexual assault. I also love the way Maddie has the hots for Jonathan, he is oblivious to this and she irritates him intensely.
So don't pick holes and go with the flow, because who wouldn't want to live in a windmill?
90s TV Jonathan Creek