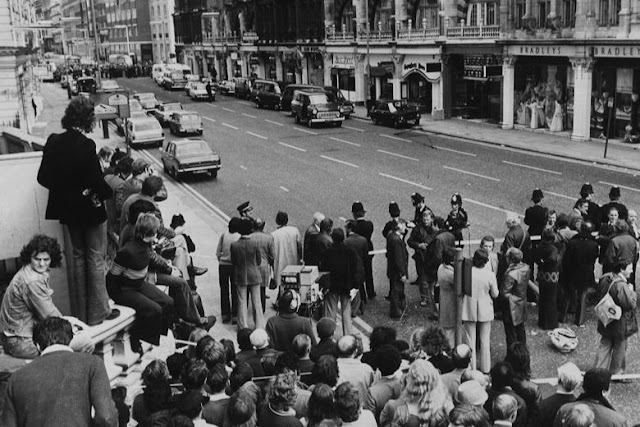 How have I managed not to pass comment on Minder up to now? Despite being a series which IMHO went on too long, I love the gritty depiction of 1970s London in the early episodes. This is the same world shown in The Professionals and The Sweeney, just seen from the underside.
This episode is based on real events  of the Spaghetti House Siege in 1975, which bears more than a passing resemblance to the Minder script. Three black men attempted to steal the week's takings from an Italian restaurant in Knightsbridge, but wound up taking the staff hostage. Surveillance techniques were used by the police, the hostage takers made rather confused attempts to pass the robbery off as a political act, the press nobly agreed to help the police manipulate what was happening by their headlines, and one of the hostages developed what later became known as Stockholm Syndrome. 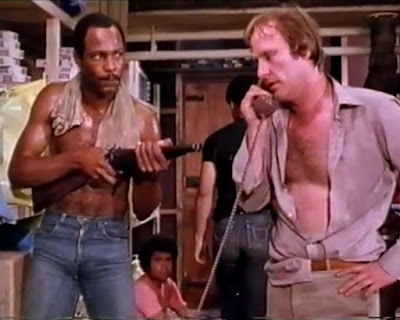 The episode also deals with another issue of the time, namely immigration, by cleverly juxtaposing the concerns of Italian immigrants, who are bothered that their children no longer identify as Italian and can barely speak the language, with the concerns of black criminals who try to pass off their theft as a political act. The Spaghetti House robbers demanded a plane to Jamaica despite the guy who wanted it actually being from Nigeria.
My frank thought about this is what a horrendous life it is being a 'minder' - or rather general odd job man, usually for jobs which require some intimidation or muscle. Minding the owner of the launderette as he gets the money out of the machines being a case in point. It is striking that nobody in this is exactly prosperous (I don't think stripping brings in that much money), but despite that the characters are not miserable and Minder avoids the bleak despair characteristic of so much seventies TV.
If I have a criticism it is that it feels a bit claustrophobic and drawn out once the siege starts, but of course that's the point. Of course we all know that the siege has to end OK for the protagonist and I suppose that is one of the things which makes TV comforting rather than traumatic.
Perhaps I had better end with the disclosure that I have a bit of a thing about launderettes, I find them absolutely fascinating and apparently the one featured in this show is still there if anyone wants to visit.