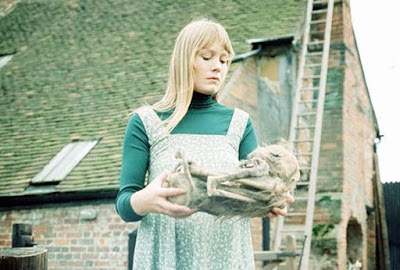 I am probably going to sound fairly critical of this episode, which isn't my intention at all - regular readers will be aware that my policy is only to post about what I consider to be good television.
And it may be intentional, part of the depiction of a pregnant wife's breakdown, but there are a few things which chime wrong notes.
The absolutely first thing is that the vet's wife brings the family cat to their new home in a basket, opens the basket in a room which isn't sealed tight  and is then surprised that the cat runs away. This is of course a rookie error, and would be excusable if she'd never seen a cat before, but it is her cat and she claims to have grown up in the country. She is also a vet's wife and I doubt that he would never have brought a sick cat home to keep an eye on it overnight.
I see from the excellent Celluloid Wickerman post that this story lends itself to a Freudian interpretation, which is of course completely valid but I hadn't thought of it because I was thinking of a different reading:

During a final breakdown, Jo goes downstairs in the house to find some horrific monster suckling the dead creature from the jar.  It works as a stunningly effective metaphor over the fears of pregnancy, especially in Jo’s world where her husband seems to care very little of anything but his work.  But the moment is more than symbolic or metaphorical ; it is the final stage that Freud described in what has been a gradual build-up of a case of hysteria.  It isn’t a simple case by any means and the theory as a general train of thought is rightly open to interpretations of sexism.  Kneale does not, however, simply adhere to Freud’s admitted bias and concerns the psychic phenomenon to the relations with all of the people that surround Jo’s character; the hysteria isn’t inherent in just her but built up through everyone else’s relation to the building and, eventually, the jar.
It is hinted earlier in the play that Jo has already lost one baby during childbirth.  The potential for increase in paranoia is clearly there for the character as stories are related of how farmers simply couldn’t use the adjacent fields any longer for grazing as it meant the cattle went infertile.  The hysterical state of Jo builds from when this story is related, not because of the simple connection made between the story and the reality of danger but because it clearly awakens these memories of the loss of her first child.  Freud said that “The attack then comes spontaneously just as memories are wont to come, but just like memories it can also be provoked by the laws of association.  The provocation of an attack results either through stimulating a hysterogenic zone or through a new experience which by similarity recalls the pathogenic experience.” (1895).  From this description, the application of the idea to Kneale’s narrative is relatively simple, albeit that both potential forms of trigger happen in Baby‘s story. Source

This Freudian reading is valid, and the cat incident could be interpreted that way. In fact much of Jo's behaviour could best be explained by her 'condition'. But I was thinking of this episode more in terms of folklore and relationships.
The relationships are wrong in every way. In fact I am firmly of the opinion that Jo would be best getting rid of her husband pronto. He talks to her like dirt, clearly puts his own wishes before the welfare of his wife and unborn child, is completely unsympathetic to her distress. He and his boss both speak in derogatory terms of what pregnant women are like. At one point his boss sets up Peter for a hard time at work. My reading of this situation is that in a series themed around bestial horror, here we are being given a message that humans can be far more beastly than animals.
Ironically the vets' science is placed against the 'superstition' of the builders. In removing the 'thing' from the wall, ironically they remove a common folkloric way of making a building safe. This is very common in British folklore, although it is turned round here to be the source of the horror in the house. Therefore in a strange way the beasts remove the beast which protects the house from beastliness. The unkind treatment she gets from her husband is contrasted with the kindness the superstitious builders show her.
All that said, the story can also be read as a straightforward horror. In this reading the wife would be seen to be right - the horror is situated clearly in the house and in some probably ancient magic.
Do I even need to say that one of the hallmarks of quality TV is that it can be read in several different ways?
70s TV Beasts