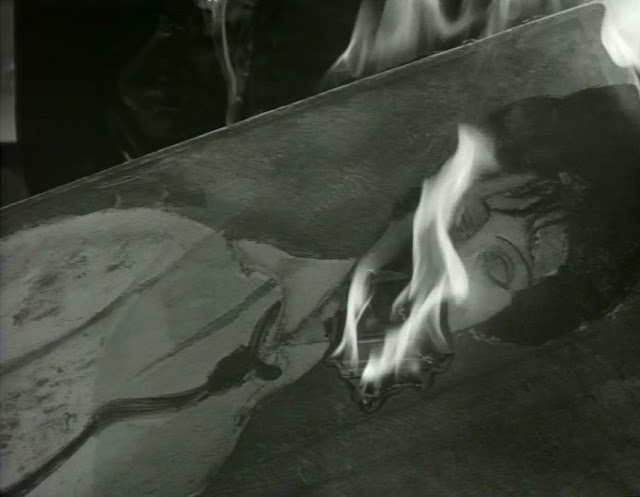 In my last post about this show I neglected to mention the soundtrack of this show, and this episode personifies perfection. It depicts demimondaine - I'm not sure of the word to use to describe them, possibly respectable people at the time would have called them beatniks - denizens of Soho and the sound track is thus jazzy and cool for cats. I have recently also been watching some episodes of Peter Gunn, which has a similarly groovy soundtrack.
In point of fact The Nightlifers places us squarely in the most sophisticated worlds of post-War Britain, just before the Beatles met the Maharishi and everyone started meditating. It has all the hallmarks - for a start being set in Soho, Gideon's wife tries to get him to get some Chinese delicacies from a shop in Soho, and there are parties and drugs galore. This episode exactly depicts the world in which The Avengers is set, including depicting a world of privilege.
This show is not the simplistic contrast of youthful exuberance with middle-aged and -class shock, although I love the shock when the mother discovers a 'marijuana cigarette' - nowadays parents are quite glad if that's all their offspring are smoking, although clued-up parents would be more worried that it may be laced with g*d knows what. Nor is this show merely a depiction of bored rich kids who have gone off the rails. Rather the tone is set when one of the rozzers says that the joy taken in the attacks is 'sadistic' - or rather it could be called psychopathic. There is a kinky undertone here, of pleasure being taken in pain. Even down to Sloane always addressing Cole as 'little man', there's definitely a kinky power thing going on here, which to my mind makes this show incredibly adventurous for the time.
The cast list is like a list of the great and the good of the theatre - Annette Andre for example will be familiar to readers of this blog - but that doesn't bother me in the way it sometimes does, because they are all greats and don't let their off screen personas dominate.
Chief among these is Anton Rodgers in the uncharacteristic role of the sadistic party thrower, in which he gives a convincing portrayal of enjoying other people's suffering. Actually perhaps it may not have been that unusual for him in his wide-ranging theatrical career:

He had been on the London stage for five years before he landed his first "legitimate" role - or rather, two roles - in a sexually sensational double bill by John Osborne, Plays for England (Royal Court).
In the first piece, a frivolous flop called The Blood of the Bambergs, he made little mark. But in the second, Under Plain Cover, which depicted a couple of devoted sado-masochists inventing new sex games with corsets and commodes, Rodgers was more prominent as a knicker-fetishist who turned out to be his female partner's brother. Source

The only thing I don't really take to about this episode is the rather moralistic way in which the son-gone-off-the-rails gets beaten up by Sloane who then ends up on a murder charge when he dies. It's all a bit too convenient for the baddies to get such immediate retribution. I'm also (I'm not a lawyer so stand to be corrected) am not convinced that Sloane would have been charged with murder - at no point is he apparently intending to kill so may have been charged with manslaughter.
And if you want to know the reason for the burning Modigliani, that is my way of wetting appetites to make you watch it!
60s jobbing actors 60s TV Gideon's Way