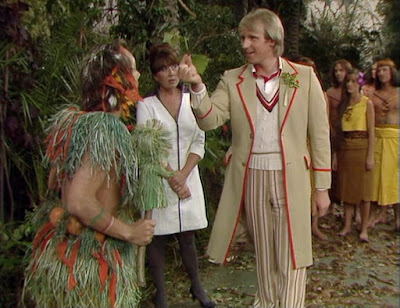 To Gloucester and Cheltenham today, where I bought the BBC boxed set featuring A for Andromeda, which I have never seen. The supply must dry up at some time, but until now, whenevr I have thought that the supply of cult TV has dried up,I have always discovered another new series. Gloucester is also famous to TV aficionados for one of the settings of Petunia Winegum's fall from fame - the other one was here in Birmingham.
I was reading an article on the train coming back about how the phrase 'white heat of technology' or something similar was first used in A for Andromeda, before the then Prime Minister used it in a speech in 1963, both of which events brought the preoccupation with science of so much 1960s TV to the fore. I have commented that it is usually an ambivalent preoccupation, because science is the hope for the future but also dangerous. Science fiction , as in Doctor Who, has an opportunity to nbuild on this ambivalence by introducing fictional elements into the fear or the hope. Kinda is perhaps best described as being influenced (at some years distant) by many of the buzz issues of the 1960s onwards, including the conflict between 'science' and 'nature'. Kinda makes this so much more fearful by putting it in the context of a colonisation by Earth of another planet (which is only made possible by technology) and contrasting this with the 'natural' lives of 'savages' and the great fear of the organic form of the Mara.
Kinda also uses other themes important on late-twentieth century Earth - colonialism, psychology, power, spirituality, development, sharing, authority - and I have to say that I think one of the reasons this adventure's reviews weren't very good when it was broadcast is that it has bitten off far more than it can chew. Looking online, I see that it has risen in popularity with the fans since originally broadcast and I have read several views, with which I agree, that that is probably because this adventure benefits from repeat viewing to get the multiple layers of understanding. As a single broadcast it is either a nightmare of complexity or else you would only focus on one layer of meaning.
A layer which particularly interests me is the one about communication. When you think about it the only effect of the male Kinda not being able to speak is that this keeps their thoughts within the Kinda who can read them. To races which would have to hear them speaking, they appear silent. Interesting that this is reserved to the men! In another sense their culture must have been a nightmare - imagine a world where anyone could read your thoughts!
The second layer I am particularly interested in is the effect of being on another planet on the colonists. Predictably they go off their head one way or another and either 'go native' or develop plans to destroy everything around them!
There are several mythological references which interest me, Garden of Eden, snakes and apples, all very biblical, but there is of course also the reference to Pandora's box. Knowledge, naivety, innocence and cunning. Placed next to this is the role of Adric, which I would initially have said was one of the few sensible people in this one, however he also does some very silly things in this adventure, so perhaps his role is more that of the Fool, as we see him in the tarot card, stepping off a precipice. I know I am apparently ignoring the fact that the Kinda have a Fool of their own, but I see the two as parallels. As a general rulewhen anyone is particularly insistent that you should open a box or eat an apple, you shouldn't.
Visually this adventure is superb. I will grant you that the forest is very obviously a set in a studio, but in the unreal world of Doctor Who that's OK by me. I love the perspex chimes, which I expect would have looked very futuristic in the 1980s. I also particularly like the inside of the Dome, particularly the gadgetry which is so much of its time it's wonderful. The colours of the dials, the giant spools of tape which at the time indicated computers, I love it. The other very good thing about this adventure is that it is the right length - I know I am contradicting myself by saying it is stuffed too full of layers and it is the right length, but what I mean is that it keeps the attention.
So, a multi-faceted gem of Peter Davies Who which does however require much attention and perhaps repeat viewing. Oh and I love Mary Morris in it.
80s TV Doctor Who