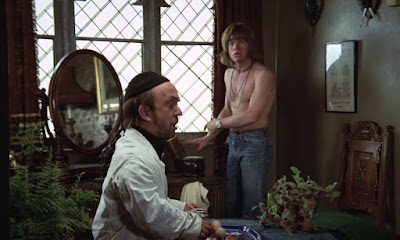 You didn't think I would be able to concentrate on the viewing list I set out in my last post, did you? Naturally I've got distracted. Do you like the genre of films where somebody sets off by train (usually) to see a relative who lives in an Old Dark House? I do, and funnily it's a genre which lends itself to humour. I'm thinking of Morecambe and Wise's Night Train to Murder and What a Carve Up! Those films loud pedal the mystery leanings of the train journey into the country genre, but this one of course loud pedals the genre's horror leanings... While also being funny.
I suppose this film won't be to everyone's taste by any manner of means. The opening scene shows two runaways from the hospital being beheaded by knives which come out of the side of the doctor's car. No matter how often I see that scene it makes me roar with laughter. I think this is because the scene is so obviously a parody. Nonetheless if that sort of thing doesn't strike you as funny, you won't like this film.
It stars Robin Askwith who also starred in a series of 1970s sex comedies, and I like a good sex comedy me. He was also in Pasolini's Canterbury Tales which is one of my all time favourite films. Here he provides a romantic interest by falling for the female lead, who is going to the hospital to see her disreputable aunt Harris. I looove aunt Harris, the way she ran a brothel in Germany until the war started.
Another thing I love about this film is the wildly improbable plot - personally I wouldn't go on a 'Hairy Holiday', since I like my holidays restful.
It turns out the hospital is running a mind control programme including lobotomies, which gives lots of scope for bandages and blood. It sticks faithfully to the conventional plot, so the film is spent progressively discovering the horror in the hospital and then getting out of it. On the way it has many a good scene - I particularly like the one where aunt Harris finds decapitated heads in the water tank.
If you are determined to criticise this film, I suppose you could talk about the obviously cheap special effects and production values, but personally I think that's the point.
I'm glad aunt Harris escaped to go back to running her whore house in Hamburg, I had a soft spot for her.
Not TV