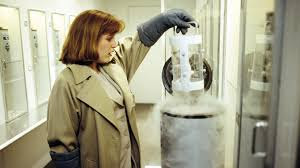 The perfect period and identity for an informer in this show.
So to conclude: way too much going on, but one of the all time great episodes of the X-files.
90s TV The X-Files