Jason King: As Easy as ABC 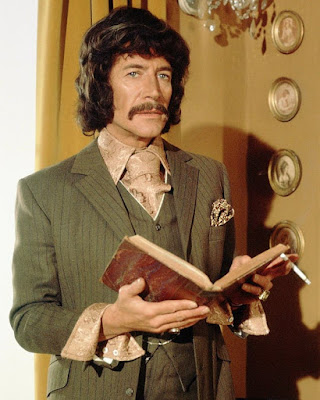 Reality vs unreality, that is one of the continual themes in the TV of this age, that I write about here. I err on the side of unreality myself, and would identify the intrusion of brutal reality into the television world, as the seventies wore on.
One of the doyennes of unreal television is the character of Jason King, and somebody leaving a comment (you can see it here) about a forthcoming biography of Peter Wynegarde has caused me to watch the eponymous series today.
The opening scene makes the location of this episode clear: the manor house used to set the scene is used in many ATV series as well as The Avengers, so the episode is firmly set in Avengerland, thereby making its setting in unreality clear. The premise is even more unreal: the plots of Jason King's crime novels start to happen in reality and naturally he is suspected of the crimes.
I love this Jason King, particularly that pretty well everyone is a caricature, in fact I think that generalisation can be extended to the whole series.
I am interested in the biography of Wynegarde because it seems that the unreality spread to his own life as well as his TV character's:

Interviewed by Ray Connolly in 1973, he said: “As a child it was difficult to differentiate sometimes between fact and fantasy.” He insisted that he had been born Peter Paul Wyngarde in 1933. However, JG Ballard, who had endured the Japanese internment camp Lunghua with him, stated in his 2008 memoir Miracles of Life that “Cyril Goldbert, the future Peter Wyngarde, … was four years older than me”; Ballard had been born in 1930.
Ballard recalled him writing on a wall “what he said would be his stage name… Laurence Templeton. A name wonderfully of its time, and far grander than Peter Wyngarde.” But the name that determined Wyngarde’s career was Jason King. And, in the journalist Andrew Billen’s words, “Jason King went from national idol to national joke the day the first narrow lapel was sold in Carnaby Street in 1977.”

Wyngarde claimed he had been born in Marseille – though despite evidence pointing to Singapore – and that his French mother, who appears to have been called Marcheritta (nee Ahin), was a racing driver.

His father, who may have been Henry Goldbert, though Peter claimed he was a British diplomat named Wyngarde, divorced her and took custody of him; he was staying with friends in China when the Japanese invaded in 1941. Ballard remembered that he was “very popular with the ladies, distributing the most gallant flattery”.

After liberation, Wyngarde claimed to have read law at Oxford, but there is no record of him having studied there in the postwar years. His first acting credit was as a policeman at the Buxton Playhouse in May 1946, making nonsense of the 1933 birth date he claimed.

He supported Alec Guinness’s Hamlet at the New theatre in London in 1951, then played the soldier Dunois to Siobhán McKenna’s Saint Joan at the Arts in 1954. He appeared opposite Vivien Leigh in Duel of Angels at the Apollo in 1958, and said that the highlight of his career, at the Bristol Old Vic in 1959, had been playing Cyrano de Bergerac.

His burgeoning TV career brought him lead roles as Sydney Carton in A Tale of Two Cities (1957), Long John Silver in The Adventures of Ben Gunn (1958) and the title role in Rupert of Hentzau (1964). His appearance in The Avengers(1966), inducting Diana Rigg into the Hellfire Club, is well remembered.

In The Innocents (1961), he did not have a single word of dialogue; his only film lead was as a psychology professor in a horror film, Night of the Eagle (1962).
Connolly felt there was “an element of mystery about the marriage [to the actor Dorinda Stevens] he says took place when he was 22”; Wyngarde claimed it ended in divorce. In 2007, Donald Spoto’s biography of Alan Bates, Otherwise Engaged, noted that Bates and Wyngarde had been partners for a decade from 1956.
After Wyngarde had filmed Flash Gordon (1980) behind the gold mask of the chief of the secret police, Klytus, his agent, Dennis Selinger, admitted the actor was out of work. “It would be very easy for me to cry in my Campari and say the court case was the reason that TV work has not been flooding in but I don’t think it is true,” Wyngarde reasoned in 1980. To Billen, he averred, “It was the lack of imagination of producers. And if you’re a perfectionist ... producers don’t like it, because they are so mediocre.” In 1982, a bankruptcy hearing found that he was living on social security.
Wyngarde had spoken dismissively to Connolly of “all that naturalistic stuff”. His performance in an episode of the gritty thriller series Bulman (1985) confirmed that the “naturalistic stuff” had rendered his style archaic.
He had no known surviving family. Source

To be frank, playing fast and loose with ones history doesn't concern me very much. It isn't unusual to take a few years off ones age, and this may be particularly useful in the theatre.
Rather Wynegarde made the mistake of believing his own propaganda, and also the difficult to avoid one of getting stuck in a certain role and finding himself left high and dry as the tide of fashion changed. Jason King didn't make that mistake, but other people over associated him with his books and he had to prove in this episode that he didn't commit the crimes.
I love the sophisticated (for the time) setting of Jason King's adventures. I love the society setting and preposterous fashions.
Just don't start hankering after the life!

Stop press: Big Finish have just released a third volume of audio Avengers episodes based on the 1960s cartoons in Diana! You can get them here.
70s TV ITC Jason King Petunia Winegum