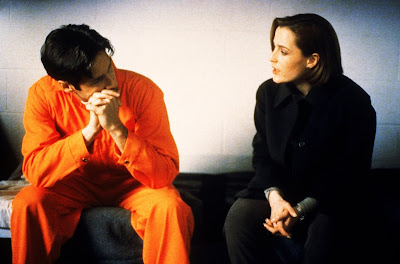 You will have noticed that I have omitted series 3 of the show. This wasn't actually intentional that was because I found that one disc of my set didn't play and put it back in the bookcase in frustration, so will no doubt find myself talking about the episodes in the wrong order at some point in the future.
Demons is a particularly interesting episode in my opinion, but for she apparently wrong reason that while contributing to the show's mythology it's also showcases pretty well everything that is wrong with The X-Files!
A common criticism of The X-Files is that if Mulder and Scully we're actually FBI agents they would probably be sacked for incompetence. In this episode alone they don't hesitate to interfere with evidence. I'm no policeman but I know when you find a dead body you leave it alone rather than fiddling with it, moving it, or anything else.
In fact this episode makes me wonder whether any management went on in the fictional FBI depicted here at all. It is very obvious that some crime has been committed in this case, they are not simply chasing after little green men, but Mulder, despite being ridiculously involved with the case, is at no point removed from it for the purpose of objectivity. I would hope that in the real world and agents suffering what he suffers in this episode would be suspended on medical grounds anyway. However not in the world of The X-Files.
And it isn't only the FBI. A police Precinct is depicted where and obviously unstable officer has merely been moved to a desk job before shooting himself in the head. An examination of his flat depicts his sheer obsessionality, and it makes you wonder how traumatic the rest of this Force could be! That said, in the world of The X-Files, picturing institutions such as prisons and police forces dens of alien abduction, supernatural activity and active mental illness what helps to create the picture of the unstable world which the government is allegedly denying.
The episode also has a go at the psychological profession. Dr Goldstein is stated to be a psychologist, who naturally would have a clinical doctorate, yes otherwise is treated as if he is a medical doctor. His all treatments reference sort of experimental psychiatry which happened in the 1960s when patients were given such things as LSD therapy. Certainly on this side of the Atlantic, patients who subsequently suffered bad flashbacks have sued the hospitals that treated them with this.
Otherwise the psychiatric reference of this episodes is one I have mentioned in this series of posts before, the very 1990s obsession with false memory. Here the doctor is explicitly creating false memory using hallucinogenic drugs. Again I would surmise that this was intended to create the effect of an institution which is going downhill fast and is uncontained.  This approach just has the disadvantage that when it is examined critically, creates an effect of unreality.
More troubling still is the dependence of the fictional therapy and of the episode on finding memory, probably the least reliable source of history that there is. When you put into the equation that this is being sought by someone who actively wants to believe that his sister has been abducted by aliens, by the use of hallucinogenic drugs intended for horses, the results of this quest are hardly going to be convincing!
I do realise that I am being overly critical. The reception of this episode was apparently good, it's just that in my opinion you have to watch it fairly uncritically and allow it to build up The X-Files mythology. Perhaps this is the greatest weakness of the show overall, that it depends too much on repeated devices intended to create a particular effect on the audience, such as the use of memories. I remember finding this very very effective when I watched it the first time round, but feel that this repeated use of the same devices meanse show can have difficulty bearing repeated watching, as the holes in the plot to become more apparent.