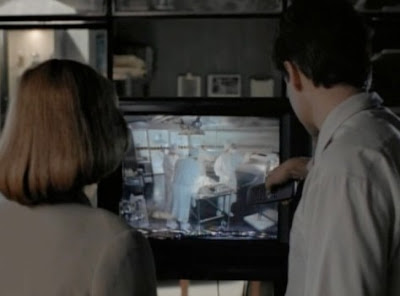 You thought I'd got distracted from my re-watch of the X-Files, didn't you? Only temporarily because here I'm back with an episode at the heart of the series's mythology. Not only do we see proof of aliens but Scully learns she has been abducted and there is a whole support group. We also learn the international nature of the cover-up. I see that I have already written about the second part of this two-parter here.
This episode ironically references a major topic in 1990s therapy: false memory syndrome. 'You're afraid to remember,' says one of the other abductees to Scully. Outside the world of alien abduction there are all sorts of reasons a person wouldn't remember something, a common one being trauma, and of course the controversy in the 1990s was that people were 'remembering' abuse which probably never happened. The X-Files cleverly gives alien abduction a tangible proof - the scar on the back of the neck and the accompanying implant. This is more than abductees can produce in real life and strangely enough, amongst other things abductees are apparently prone to false memory syndrome ( Source ).
Another real reference is to the experimentation on humans (never tried as war crimes) on human subjects in Unit 731. The show cleverly weaves real history into its own mythology, and unethical medical experimentation is a recurring theme, building up a sense of human collusion in the sort of experiments the aliens do. Here the real history remains subordinate to the series's own mythology.
There are a few fatal flaws in this episode, in my humble opinion. Right at the beginning we see the alien autopsy being interrupted by troops. No. Just no. If the evidence for aliens were as well known to public servants(even ones at the highest levels of secrecy) as the show depicts it to be, it would have been leaked by now. The other huge mistake to my mind is that the autopsy is broadcast via satellite - something asking for the footage to be stolen, as it is in this episode.
The show highlights a difference between US and British English. The police station in Allentown is called a substation, which makes perfect sense as a smaller station dependent on the resources of a bigger one, but here the word is exclusively used for part of the electricity supply system.
90s TV The X-Files