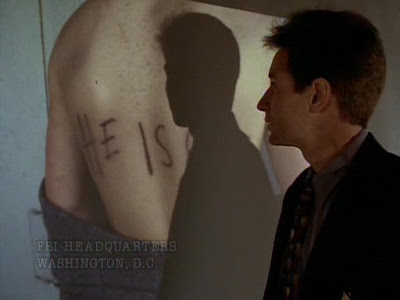 I feel the show doesn't really get into its stride until series 2, when it really ramps up the weird and layers the elements of the shoe's mythology to confuse the viewer.
This episode manages to include many of the popular fears of the nineties - dodgy inoculations, new age stuff, paedophilia and so on - which can make the episode seem rather dated.
I have mentioned the role of religion in the X-Files before and in fact commented that it is frequently contextualised within American society and often used as an element in what I like to think of as the 'American dream' episodes. Of course in the X-Files the point is either to use the American dream as the bedrock of stability within which religion is enshrined or else the religion portrayed is seen as kooky and a dangerous intrusion (as is the case in this episode). The irony is that in a country with guaranteed freedom of religion you can only expect to get some colourful new religious movements. So the members of the church of the Red Museum better enshrine the American dream than do the frankly rather scary inhabitants of Delta Glen.
I do like this episode enormously and my criticisms are basically the ones everyone makes, that the episode is way too complicated and there are way too many themes incorporated. It is so confusing that I had to read the plot summary on Wikipedia and remain convinced that at one point Scully tells Mulder the kids are being injected with alien DNA, which really made me sit up and pay attention!
However this episode does have some gaping holes. The wandering around in pants with s/he is one carved on their back is spectacularly unlikely. If you're doing something that bad you try not to draw attention to it - to be honest I'm still not sure whether that was explained I'm afraid. The actor Bob Frazer who played Gary, was 22 or 23 at the time this was made, and looks too old to be at school.
Perhaps it is best to watch this episode with disbelief suspended, because despite its failings this episode does a very important thing. It implants the whole mythology of the X-Files firmly into American society, bringing home to the (American) viewer the possibility that this could be happening in their town, and that is the real power of the X-Files. There are people who believe the stranger things which happen in the show and it merges 'fact' and fiction to suggest it could really happen.
90s TV The X-Files