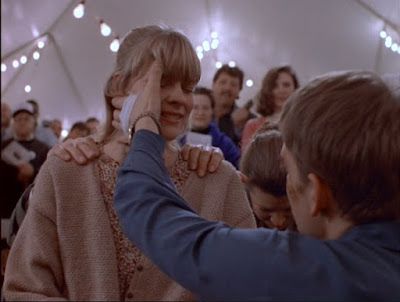 While I have been off work I have watched a lot of my boxed sets right through. The exception was The X-Files, simply because I didn't get round to it. So now I am back at work I have started a mammoth viewing of the series. The other thing I have been doing is reading some blogs, among them David Stimpson's always excellent blog about The Prisoner. I see he has a book coming out and I'm sure I will get it when it does. I think in future I might try to emulate the format of his blog with much shorter posts: you will notice that I haven't been writing the longer posts I normally write at all.
I am noticing the ambivalence of the X-Files towards religion on this viewing. I suspect this is because it is part of the American dream which is such a significant background to the show. It is part of the stability of society and yet for the most part its adherents tend to be seen as naive if not frauds. The healing ministry here is a rather obvious target and yet Samuel tells both Mulder and Scully things about themselves. At the same time it is apparent that everything going on in the episode is not divine.
My absolute favourite bit is where Samuel appears to the murderer after his death - I do like a deceased with a sense of a mission. And what's not to love about walking out of the morgue when you've had enough? Quite apart from the obvious religious reference.
Elsewhere in the series credence is given to the neo-Pagan religion of Wicca and it is differentiated from the Satanism so feared through the eighties and nineties. But the religion which dominates tends naturally to be Scully's ambivalent Catholicism.
So religion is seen in a number of different ways in the show and isn't merely a support for the mythology. In this episode however the religion is seen as apparently a fraud but which prompts Mulder and Scully towards a deeper consideration of their own losses.
90s TV The X-Files