The X-Files: Duane Barry and Ascension 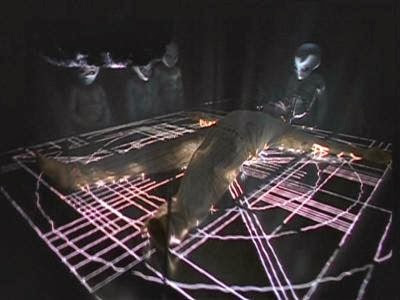 Back to bulletpoint blogging! I haven't veered off from the X-Files yet and have just watched the episodes Duane Barry and Ascension - the latter being the continuation of the first.
I found them profoundly dissatisfying on this viewing - primarily because I feel that it's as if too much material has been used in one go.
1. The alien abductee who goes off on one would be enough.
2. I do like very much that Mulder believes him, and of course it's typical that the sceptical Scully is the one who gets abducted!
3. I love the introduction of the mountain which reappears in the series.
4. What the hell was Mulder playing at when interrogating Barry? Rewatching this show at this length of time brings out the sheer unprofessionalism of much of what happens, which rather lets it down.
5. I do love that Barry was also FBI.
6. I can't remember whether he is actually mentioned in the episode but the name of Phineas Gage is often mentioned in connection with this episode. It is interesting that Gage's case was the first to suggest that brain injury would cause personality change. It may seem obvious to us now. To me what it means is that it reinforces that the empirical scientific method which the X-Files places in opposition to belief in little green men, is incredibly recent.
7. The scenes of alien experimentation on Barry and Scully are incredibly effective and reminiscent of A Clockwork Orange.
Nonetheless of course, despite my criticism I continue to love the X-Files and am greatly enjoying my rewatch of the series.
90s TV The X-Files