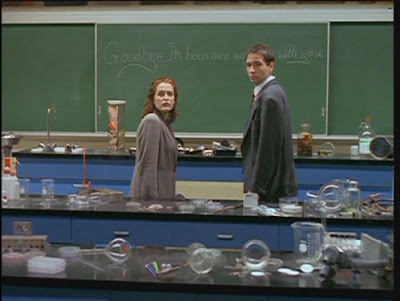 It wasn't intended but this series of posts seems to be becoming a series of posts on religion in the X-Files. This episode is as confused as the one in my last post however I feel that confusion serves a plot purpose here in preventing the viewer knowing what's going on and drawing on the common fears and confusion of the time to press buttons in the viewer.
For a start, what's not to love about the school in this episode? Merely to be able to say that you went to a school where the PTA were Satanists would be enough reward and guarantee that your school reminiscences would beat everyone else's for life.
The question it raises is how to respond to this situation. And the essential difference between the situation in this school and the Imagined situation in many a school at the time, is that it's really happening. The strength of this episode is that it draws upon the Satanic panic of the time, and its weakness is that Mulder will believe any old rubbish he is told.
Scully is of course right that there is no evidence that the sort of Satanism depicted here actually happens. It is a very interesting example of how a belief spreads and people believe it. In the 1980s for example there were bursts of the panic here, on the other side of the world, which social workers believed in. I have read that the damage done to communities by tearing families apart on the basis of no evidence is still being felt today. I would personally expect Mulder to know this, and while it is obviously for the sake of the narrative his belief in this nonsense is not convincing.
The show also draws on the common distaste in English speakers for anything German, although that may only be in English speakers on this side of the Atlantic.
The episode also cleverly muddies the water by making heavy use of words like 'witch' which tend to mean different things to different people, for example to a Wiccan from New York and to a person with a cultural belief in witchcraft in Africa. This is a very difficult subject to deal with at the best of times, and there are points at which the episode feels like it is either skirting around predicted complaints from Wiccans or is actually an apologia for Wicca. Probably the former in my opinion since I can't really see a plot reason even to mention Wicca.
Otherwise the show is on safe ground here - magic is a classic plot device for a show like this and also provides a convenient resolution to the episodes ending. I feel the resolution makes the ending rather weak, myself, but it may have been deliberately inconclusively ended to leave the viewer with the feeling that it is still out there and the magic of Mrs Paddick could appear anywhere.