Mitchell Hadley kindly mentioned me once more in his last weekly review of the cult TV blogosphere. Thank you. I doubt that he will feature this post because it is mostly about boobs and custard pies!
I have been watching some comedy programmes while unwell recently. The Golden Girls make me roar with laughter. I have also been watching the BBC comedy classics DVDs that I have. Personally I think their one - disc selection of Milligan superior to the boxed set of his series Q.
Milligan's humour is truly anarchic. You won't like him if you can't ignore the fact that some of his jokes would now not be considered suitable for polite society. Oh, and if you don't like gags about boobs you won't like it either.
My absolute favourite sketch on the disc is a spoof game show in which the contestant, a housewife, is overjoyed to lose everything in her house as a result of being unable to answer the questions, ultimately being evicted. We see the furniture and even the bath (with our only glimpse of a topless woman) being taken out by removal men.

What I love next best is what he does to Michael Parkinson, in this sketch and the following one, in this one by getting Parky to use the word boobs. I love that one of the characters wears his boobs at the back. I did say this post would be rather low brow! In fact boobs continue to feature highly! 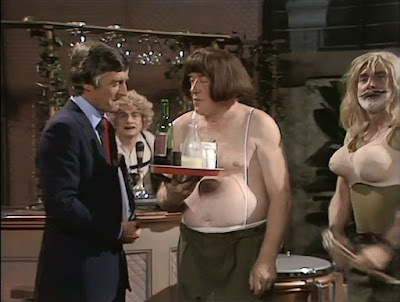 I think there is a strong slapstick element to the humour - as it is often manifested in people doing embarrassing things. The topless waiter has his trousers pulled down to prove by his leg hair that he's a man! Taking clothes off for comedic value is a frequent feature of slapstick. 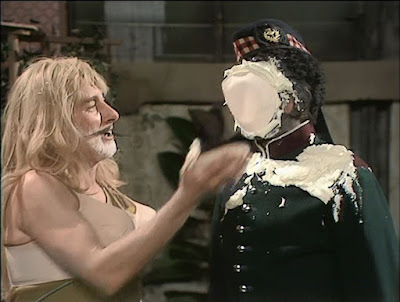 Another one is the custard pie and the target of this pieing does a great job of taking it. 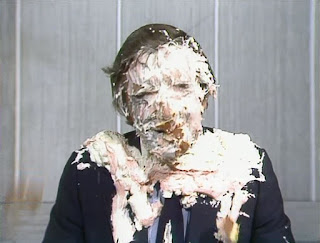 Even better is the pieing Parkinson gets in another sketch. And it's a good one as well - the pies are big ones created to mess him up and humiliate him as much as possible!