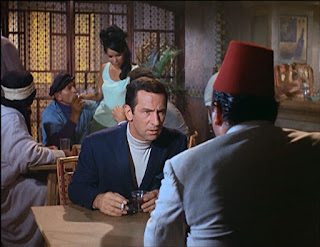 weeks ago I posted here about a first-series episode of Get Smart, and the post seemed very popular, at least to judge by the comments. The way I discovered that the series was available was this: I saw the whole boxed set in the HMV shop round the corner from me and it stirred a memory of the show. I simply had to have seen it because it seemed so familiar, but I had little recollection of it, so I only bought the series 1 set online as a taster to see if I woud like it again. I did and as my Christmas present to myself have duly bought the whole series as a boxed set (in region 2 format, obviously). I also managed to get it on ebay for £20 less than the normal retail price which is around the £50 mark. The set includes all 138 episodes on 25 discs, with 8 hours of bonus footage and features. I see from the box that the run time is 3964 minutes, which is 66 hours of Get Smart. I've started early but I don't think I will have exhausted it by Christmas day!
Some of the online reviews of the whole series of Get Smart imply that the quality went downhill as the series progressed. I can't speak for that yet, but my own impression in series 2 is that the show feels much more reassured, as if it has found its feet. I am particularly delighted that some of the series 2 episodes parody films and other media.
This parody of other media is something repeatedly found in cult TV. The obvious example is the way The Avengers parodies famous films - while as it were Avengerifying them. The other obvious example, since this post is about Get Smart, is that Get Smart is itself a parody of The Man from UNCLE, which is itself a parody of the espionage/Bond genre of films and TV so popular in the 1960s. The parodying has come full circle with the ongoing series Archer parodying many of the set phrases of Get Smart...and loving it.
Of course this Get Smart episode isn't really a parody of Casablanca, at least as far as plot goes. Rather it contains the things that we all remember (or think we do) about Casablanca, thus giving material for the real film buffs to criticise it. But I think that's the point... In fact if you carry the fact that this episode of Get Smart is an imperfect parody of a famous film, you get the real point of it. Get Smart has Get Smartified Casablanca, by getting its parody subtly wrong. Let's face it, if it was spot on, it wouldn't be an episode of Get Smart, would it?
In fact the point of this one is rather the fact that Smart is hopeless and that hopelessness extends to everything he does. The mere fact that his boss is desperate to send him on holiday to Canada indicates that everyone can see he is hopeless. This mystery kicks off with a man he is supposed to be guarding getting murdered in front of his very eyes, and his hopelessness continues throughout the episode. The wonder is that he and 99 between them actually manage to work out who the Choker is. The wonder is that Smart manages not to recognise 99 in her blond incarnation...
Which brings me nicely to the high point of this episode, which is the way 99 is turned into a blond nightclub singer and wows the club with her singing. The next highest point is Smart talking like Bogart, making this episode more of a character impersonation than a parody. I love that while 99 suspects that the man who looks like Smart is actually Smart, Smart has no suspicion of who 99 really is at all.
One weak point is that I think the episode ends rather quickly with the easy plot trick that Smart had a neck protector thing on and pretended to be dead so that he could shoot the Choker while he is trying to choke 99. But then I don't think it's reasonable to expect Get Smart to work too well as a straight espionage show...as a Get Smartified parody of some half-remembered high points from a famous film, though, I love it.
60s TV Get Smart