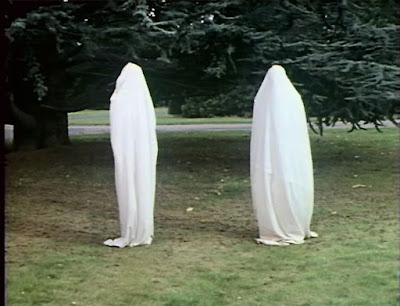 I suppose there was a time when the only source for information on cult TV was books - and friends, of course. Then came the internet and provided a place where fans of old TV could both publish their own opinions and be influenced by other people's. I find these days that whenever I want information about a TV show and google its name, the web pages which give me the information I want will tend to be from blogs, and will also give me the writer's opinion to make me think in a different way. This post is almost entirely due to the influence of Grant Goggans's blog, since he has been watching The Goodies with his son and has prodded me into giving the show another go.
Of course I have seen The Goodies before, but I suspect I wasn't in the right mindset at the time, because I remember heartily disliking it. On watching it again I find I like it enormously and in fact have watched the discs I have, several times. But let's get the criticism out of the way first - the show is very much of the time and hasn't really aged that well. There is one show which talks about South Africa - obviously with reference to apartheid, but younger viewers may not get the reference. The other thing is that it is a bt of a nostalgia fest - the trousers and flared, the hair is long, in addition to the contemporary references. For a TV fan it is interesting to see the contemporary outside broadcast set-up after Bill is taken on by the BBC - no doubt it looked bang up to date at the time. I do like, though, the Avengers-esque set in a field. These contemporary references of course have a tendency to sound different forty years later - there is for example a reference to doing an impression of Rolf Harris!
The contemporary reference in the case of this episode Mrs Desiree Carthorse is an obvious reference to Mrs Whitehouse's obsession with having nothing naughty on TV. The Goodies use the medium of a TV show very cleverly to show up Mrs Whitehouse's prudery and obsessionality with stopping normal elements of human life appearing on TV. The joke is of course that their gender education film, 'How To Make Babies By Doing Dirty Things,' is so ridiculously unsexy that it's hilarious. The results of Mrs Carthorse's actions are shown by the way people turn against The Goodies, who are referred to as Baddies in their hate mail.
But the absolutely best bit of this is the spectacle of Richard Wattis in a wig and a pink suit, interviewing The Goodies who collectively play another prude, Sir Reginald Wheel-Barrow, who decides that the film is inocuous. Wattis tells him that he has only been invited to give an extreme loony point of view. The absurd visual humour of The Goodies is shown by the fact that Wattis can only see that they are The Goodies and not Sir Reginald, when they take off their moustache.
The humour gets steadily more ridiculous as the episode goes on. I particularly love the way Bill goes berserk and starts shouting rude words (like brassiere) at Mrs Carthorse before eventually blowing up BBC TV Centre. I think if you like Monty Python you will probably like this - although it has a less cerebral feel and was obviously aimed at a slightly different audience.
My one criticism of it being slightly too contemporary and thus dated is my only one. The picture is perfect - and the colour palette is rather brighter than the porridge colours which dominate in so much TV of this time. The sound is also perfect. My impression is that a lot of trouble has gone into the restoration and I have enjoyed watching this for the fourth or fifth time greatly. That said, despite ending on a happy note I will still traumatise the cult TV blogosphere by appending a picture of myself enjoying the sun on the canal bank earlier today - it's been a glorious bank holiday here for a change! 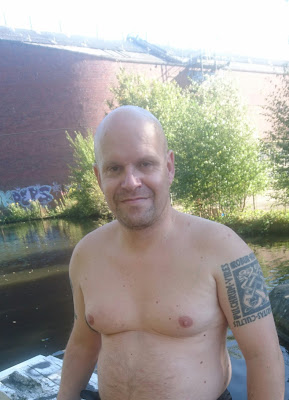 70s TV Me The Goodies Topless on TV