Tales of the Unexpected Rehabilitated 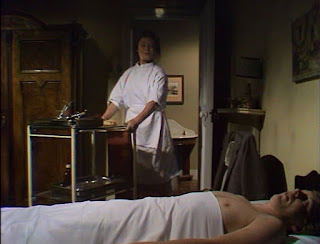 I am completely sure I have blogged about this show here before, but since for the life of me I can't find the post, it may just be that I have mentioned it in passing. Anyway, what I have probably said about it before is that I loved this show as a child, finding it terribly sophisticated and really attention-grabbing. I have probably also said that I have recently had a set of the whole first series and found it incredibly dreary. Actually, given that that was my opinion it is not very surprising if I haven't blogged about it.
Nonetheless today I thought I would give it another go. Unless you're a fanatical completist and want the every-episode-ever box set (on something in the region of 473 DVDs), or fancy buying it one series at a time, I have a recommendation. Buy the 'best episodes' box set, which comes on ten DVDs and is manageable. If you live in the UK the most affordable way to get it is used from Cex at £12.00. I have also realised two things about this show - one is that the quality is more patchy than I remember from my youth. The other is that I have read elsewhere on the internet today, that beyond the second series the episodes weren't actually written by Roald Dahl. What I'm saying in a roundabout way is that buying the 'best of' box set will excuse you from seeing the duds, but that I have a feeling any viewer will be hard pressed to like every episode of such a long-running series.
I came to it again, willing to give it another go. To my astonishment, I found that it was really gripping. I popped a disc in the drive while cooking, and found that I kept stopping to turn round and look at the screen. I am delighted to find that my early memories of this show weren't as wrong as I thought they were - it was perhaps just that I wasn't watching the best episodes.
In fact I am so delighted that I an rushing this into print so that Tales of the Unexpected can be rehabilitated in the view of Cult TV Blog, without watching my way through all the discs. Naturally it may be that some of the episodes are not to my taste, but that will just confirm the theory I have come up with above.
Of the episodes I have watched, I would have to say that they have retained their power to terrify and horrify. For example on the disc in the drive at the moment is The Stinker. This episode accurately creates the feeling of being on the receiving end of bullying and so can only be an alarming experience for the viewer. I'll Be Seeing You is an apparently fairly conventional tale of a man and a woman who loathe each other stuck in a marriage, relieved for the husband only by the affair he is having with a woman who is steadily losing her sight. Without spoiling the story, the unexpected thing in I'll Be Seeing You is truly ironic, would have been horrible for him in reality, and was probably a bit of a triumph of technology at the time. I particularly like the economy with which the horror is developed in The Landlady, featuring the scariest landlady in world history (pictured). The Landlady takes the premise of Arsenic and Old Lace and somehow makes it so much more twisted than it was to begin with. I particular love the element of sexual frisson the landlady gets from her guests.
One of the things I have managed never to notice about this show is the absolutely stellar cast of stars. Joan Collins for a start. John Geilgud to be going on with. Even I can't moan at Really Big Names, because their acting ability tends to be so good that they enhance the show! There are also a number of familiar faces from TV of the period, but I'm going to be good and not moan about it.
So despite my recent disappointment at seeing this programme again, I'm now finding it rather difficult to think of anything critical, but I'll have a go. I suppose the obvious criticism is that if you don't take to anthology series, you won't like this. It is in the nature of the medium that the episodes will vary from each other in style and quality. I would also say that if you are watching this as a fan of Roald Dahl you are going to be disappointed beyond the first couple of series. Not only do his introductions to the episodes disappear but I have read that the later episodes weren't even written by him
Otherwise this is very much what you would expect of the higher level TV of the time in terms of appearance and production values. I would recommend it for a viewing if you're not familiar with it.
70s TV Tales of the Unexpected