The Omega Factor: The Undiscovered Country 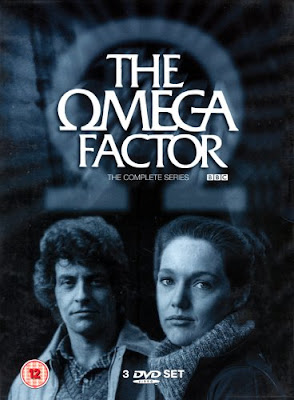 I'm sorry to return to one of my preoccupying worries, no matter how briefly, but regular readers here will know that I get rather worried that the supply of old TV will dry up. Of course it has to happen sooner or later, leaving only the rare discoveries of odd Doctor Who snippets in Zimbabwe or wherever, but once again my fear has been assuaged. I have discovered yet another series which I had never heard of and which is available in its entirety, reasonably priced, from reputable sellers, on region 2 DVDs. It is The Omega Factor, and given its subject matter I am amazed that I had managed to miss it this long, until it came up as a suggestion for me on Amazon.
I try not to repeat information easily obtainable elsewhere on the internet on this blog, which is my excuse for why it mostly consists of my own opinions with a minimum of research. In this case googling the name of the show gets you as much information as you could ever want about its history and production. Highlights of the history to my mind include that Mary Whitehouse raised several complaints about the level of violence in the show - unfortunately the BBC had to admit that they had broken their own standards with this one. Another, major, highlight is that this show is often referred to as a precursor of the X-Files. And finally there is the almost mythical status of this show because after one showing of the first series, a second series was not made, and the first series was never seen again until it was released on DVD in the twenty noughties. These three nuggets alone would be enough to make me very interested in this show indeed!
It is an indication of how much I like this that the boxed set only came through the letterbox this morning and I'm already rushing enthusiastically into print about it on the same day. I have now watched several episodes but will try to limit myself to discussing the first episode, The Undiscovered Country, and general points about the show, in this post.
The first thing to be said is that as a 'pilot' for this show, I would urge any prospective viewers to give the first episode time to get into its stride. Much of the point of this episode is that the journalist Tom Crane is outwitted by a sinister magician and is not ahead of the game. Meanwhile the back story has to be established - his interest in the paranormal, and the way he is set up by the baddies and enlisted by the goodies. This is perhaps the aspect in which the similarity to the later X-Files is most obvious. The series abounds in secret meetings, conspiracies, you name it...if it wasn't that this was the seventies and *everybody* smokes, I would keep expecting Cancer Man or Deep Throat to appear out of the woodwork. That said, despite an apparently pedestrian plot of goodies against baddies, there is one way in which The Omega Factor excels in telling its story. A further likeness to the X-Files is that Crane, the protagonist, develops a personal interest in what is happening because of the death of his wife in this episode, which mirrors Mulder's preoccupation with aliens as a result of his sister's disappearance. Just as in the X-Files it is apparent right from the start of the episode when he has nightmares, that he has an involvement in the magical stuff here.
The Omega Factor excels in telling an extraordinary story in a completely matter of fact way. There is so little drama about it that the extraordinary thinkgs which happen are both easily missed and absolutely horrifying when they happen. Hopefully I will manage not to publish a spoiler here, but the sinister magician Drexel's little hint to Crane of what he can do, just happens in a coincidental way and is absolutely horrific. Subtle, that's how I like my weird shit. Despite Mrs Whitehouse's complaints there is an absence of violence by today's standards despite some horrifying things happening. The DVD release has managed to get a 12 certificate in the UK, which should give an indication of how relatively gentle it is.
For we of a certain age a major attraction of the show is that it is very much of its age. The trousers are sta-prest, the interiors are pure Terence Conran, even the preoccupation with parapsychology is very much of the time. The show is still open to some criticisms, though. The pace is unusually slow for a show of this type - there is a sense in which this is an advantage because when a major event happens in the episode you don't really expect it because the show is just ambling along. The colour palette is the rather drab one we are accustomed to from 1970s shows, however I should stress that this is far from run of the mill 1970s TV, this is quality. One of the things that made it unusual is that while it was made and set in Scotland it isn't as self-consciously Scots as many of the Scottish TV shows of the time - everything really is subordinate to the plot, and it pays off. A further criticism of the visuals is that I find the picture rather dark, to be frank - it can be difficult sometimes to tell what is happening.
My few criticisms apart, I would highly recommend this show to anyone who likes quality drama, anything weird, or just plain magical stuff. The only sad thing is that it was locked away in the archives for so long, and my only regret is that it then took me personally so long to discover it!
70s TV The Omega Factor