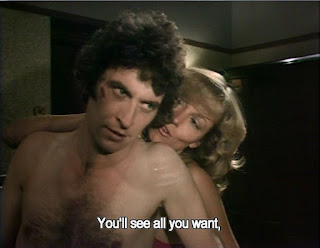 This will be a short post because I only have three things to say about this episode.
The first is that Martindale is not noticeably in charge of what goes on in his department, in fact we even see him on the phone to some (presumably) superior, acknowledging that Crane does what he likes. I find it inconceivable that Department 7 could be run in this way, and that it is more likely that the personnel would not only be hand-picked but very carefully vetted and controlled to make sure they are 'discreet'. That said, Martindale is repeatedly made out to be suspicious, so of course it could be that this is entirely deliberate.
The second is that Crane is shown up as being a loose cannon in this one. He gets himself into trouble by trespassing, surely something an official of a secret government department would not dream of doing. It is apparent again that the department is not really being run that well. Martindale even has to send someone else, Anne, to stop Crane getting himself into more trouble.
And the third thing is that it becomes increasingly apparent that Crane is one sexy piece. I would maintain that in a real secret department staff would be heavily vetted and controlled and wouldn't tend to be getting their jollies with the staff of a research unit they are only visiting, and also not with the staff of their own unit. The sudden introduction of sexiness is a misjudged element in my view and it would have been better to let Crane mourn his wife throughout the series, since that would have helped to develop his tortured hero persona. Once again I have a feeling that the difference of treatment (and not just as far as sex is concerned) between different episodes of this series, is a result of multiple writers writing episodes simultaneously, and therefore without reference to what the others were writing.
Of course it is entirely possible that Crane is depicted as a loose cannon so that we are made ready for the sheer instability of the staff of the department they are visiting. In fact the staff are notorious in the local inn. Crane's antics are fairly sensible in comparison to them. I do love the scene where Martindale just doesn't believe what has happened to Anne. In addition to the familiar narrative of bad science undertaken by psychopaths, there is the additional narrative of the shadowy Omega organisation which is behind everything which happens in this show. This show really is the X-Files twenty years before the X-Files.
70s TV The Omega Factor