The Omega Factor: Powers of Darkness 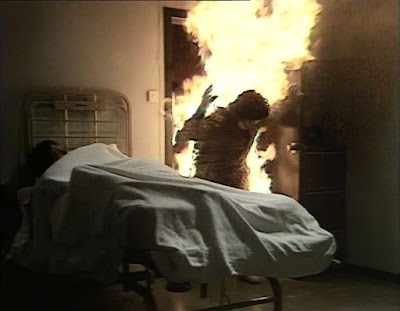 It's not really surprising that I was thinking of skipping over the last episode and rushing straight into this one, because this one takes us into classic parapsychology territory from the word go, with a seance. In this case it's lucky that the actors are keeping a finger each on the wine glass because otherwise a disembodied spirit may not be willing to communicate merely by moving the glass. Although employing dead people in theatre would of course be a great saving in Equity fees. Can you sense I've woken up with a little pixie in me today?
Actually despite its classical kids-messing-with-the-occult script this episode raises all sorts of questions for me, some of which I think might just be me being critical or feeling silly. One is that the students who are key players and open the episode, are dressed all wrong. By this I mean that the old-fashioned styles of clothing some of them wear (I think they may have been having a vogue at the time this was made) visually give the wrong impression if you weren't there at the time. I was firmly convinced that they would turn out to be dead already, and that their seance took place in a past age. This impression of them being in the past is reinforced by the old-fashioned flat theu share, and its furnishings.
The fashion show of 1970s nightwear continues in this one, with Crane's brother being featured in a psychiatric hospital. In this one the terylene bites the dust (pictured) which could be a demonstration of the dangers of wearing all those petro-chemicals next to the skin. The rubbish 1970s car featured in this one is a Rover 3500, one of the least reliable cars ever made by the British car industry: even then you didn't see many in operation because they were notorious for spending more time in the garage than they did on the road.
I have a serious criticism of the whole brother aspect of this episode: perhaps I missed it previously but I don't know how Crane's brother has somehow appeared in the show, in hospital, with amnesia... I may have missed it through not paying enough attention, though, but I personally feel that a show introducing a new, fairly pivotal, character with no warning or explanation whatsoever is a bit naughty. It may be a result of the way each episode was written by a different person - it creates a patchiness of treatment which can be disorientating.
This episode, in addition to suddenly changing tack, is a sudden illustration of how the counter-culture can go wrong. Dabbling in occult stuff is always going to go wrong on TV and film, because otherwise it isn't going to be good TV. In this case there's a parallel warning about the dangers of messing with drugs. I suspect the strange choice of datura as the drug here was because of BBC regulations which forbade them showing things which could be copied easily at home. Otherwise this show is a procession of relics of the alternative world of the 1970s. Rather than the dangers of drugs, it is therefore more an exhibition of the dangers of uncritically accepting things you have read in paperbacks. The Bloxham tapes have been shown to be fakes. The Bridie Murphy case was widely disbelieved even at the time... The advantage of the 1970s alternative milieu is that it gives the background in which the scientists of Department 7 have to sort out the empirical facts.
Despite the fact that I'm being critical I do actually like this episode very much. It has the alternative background in spades, drama in oodles, and wonderful visuals. It excels in location shots. I love the wonderful art nouveau tenement building the students live in. I also particularly love how visually effective the scenes in the church are.
My one genuine criticism of this one is that it tries to do too much - in introducing new characters, dealing with a frankly monumental plot, and several huge issues in parapsychology all at once. The amount of material in this episode could have done with a simpler treatment. I would also criticise the developing love (well, sex) interest between Crane and Dr Reynolds. Not only has his wife just died but he is abruptly seeing a colleague. It is unprofessional, reflects badly on both their characters, and could well have been left out. This is a show which doesn't need a sex interest - there's quite enough going on already. I think that it could have been done very effectively without the hospital scenes - although it seems that the 1970s-nightwear-in-hospital-bed scene is an essential part of The Omega Factor.
And it's the amount of stuff without the love interest which still makes this a great show. How anyone could think that a student being regressed to a previous life when she was burned at the stake as a witch, wouldn't be enough material to be going on with? When examined on its own this is enough. It is also the core subject that Department 7 is supposed to deal with - what happens when you attempt to contact the dead and hypnotise your friends to make them remember past lives.
70s TV The Omega Factor