The Omega Factor: Out of Body, Out of Mind 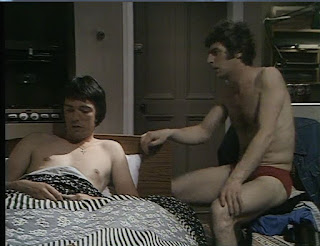 What a dream magical ability would be for pretty much anyone. I do love what happens to Sir Willoughby at the beginning of this one - there can surely be no-one who has not dreamt of the ability to influence people (if not actually kill them, as here), from a distance. This episode makes it very plain that being on the receiving end of that ability would be a fairly scary place.
Several other things are also made plain in this episode: that Omega has penetrated to the highest levels of society, for a start - a permanent under-secretary's assistant being fairly high up. The only thing that is wrong is that the assistant removes the band from the cigar he gives him to smoke, so obviously the government agency in question started to go wrong when they started employing men who were not gentlemen! Omega's ambitions are also clearly international rather than being limited to one government alone. I don't know when masonic/illuminati/new world order conspiracy theories fate from, and would be interested to know how old these theories were when this was written.
True to the X-Files antecedent theme, even though Crane's experience in this show started with strange dreams he has now become a sceptic when his brother talks about strange dreams: he becomes the Scully to Michael's Mulder. And of course Mulder and Scully did change round position now and then. Also in common with Mulder, Crane bawls out his boss about the immorality of the events of the previous episode, and has to be reminded that he has signed the official secrets act. This episode is also the first time that I have noticed Crane use the word 'conspiracy' - although it has been very obvious that that is precisely what has been going on throughout the series.
In this episode the X-Files are further presaged by Crane's developing sense of dissatisfaction at the underhand tactics used by Martindale to experiment on his brother. So we finally get some explanation of what has gone wrong with him, and Crane's role as the sceptical agent (bawling out Skinner) is developed. There is a slight difference that Crane sees Martindale as the fanatical true believer, so the dynamic is somewhat different. Crane even goes off to meet a contact in a park.
Previously in this series of posts about The Omega Factor I have rather flippantly referred to the way the show repeatedly shows people sitting up in bed, usually a hospital bed, in a variety of 1970s pyjamas. It is a surprisingly repetitive image in the show, to the extent that I am beginning to wonder whether it was psychically communicated to the writers so that the 'trope' would appear at least once in every episode. In this one the pyjama motif is changed. Crane's brother is out of hospital and staying with him, and the pyjama trope abruplty changes to a sleeping in underwear motif. Presumably the cod psychology explanation for this is that it suggests the truth being revealed rather than being hidden, or some such thing. Even if that is not what is intended it is a change on the previous visual pattern of the show. And what other scene would I use to illustrate this post?
The real opposition in this episode, though is between the world of scientific rigourism (which is also portrayed as the world determined to see its experiement throught to the end, and the world of human emotion. This opposition strangely puts Department 7 and Omega in the same side because they both have the same determination to see their project through to the end, regardless of its human implications, whether in relationships or the effect on Crane's brother's friend Hamish. The human side of this division is of course represented by Crane's deceased wife, his brother and his ongoing thing for Anne.
This division is then left hanging by the excellent ending of this episode, which makes a very clear that nobody can be trusted; Crane can't even trust himself not to set some train of events off unwittingly, by using the wrong word. Trust nobody - where have I heard that before?
70s TV The Omega Factor