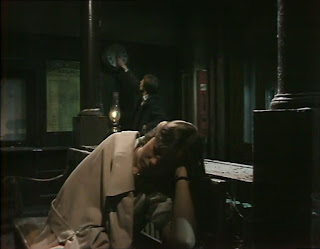 Naturally a number of my recent posts have touched on the contemporary 1970s obsession with all things 'supernatural'. This extended to all sorts of TV programmes, and the episode of Shadows I'm going to write about today is reminiscent of the Sapphire and Steel adventure set in a railway station. High praise from the old curmudgeon who write on Cult TV Blog, you may think. And it is, but I'm going to have to be frank and say that this is the episode I like best on the first series DVD of Shadows. And with characterictic inconsistency I would have to admit that I don't really like period dramas, which is what tends to put me off many of the other episodes - even though this one is a drama where one period meets another.
I suppose it is a stable of the supernatural story that trains and train stations are very strong metaphors for travelling - in this case extended to travelling in time as well as space. There are a host of ghost stories about the railways and of course the railway is the setting for many a juicy ghost story. The theme of being stranded overnight at an out of the way station is perhaps best dealt with in Arnold Ridley's Ghost Train, in which of course the train turns out to be a fraud. A touch of real genius about this show is that our contemporary protagonists don't notice the point at which they step into a different time. Their avoidance of that fact is essential to the developing story. It also gives the viewer a wonderful sense of superiority at spotting the things that are wrong. I remember reading in a Ladybird book as a child that there were country places which were still not on mains electricity - I'm sure there still are but you'd have to be way off the beaten track, even in the 1970s.
The brother and sister don't notice that they've stepped back fifty years because they don't expect it to happen, and this episode is in many ways about the ways that people behave in a strange situation. In this case, because the impossible has happened, they act as if it isn't happening. It's only really when the fire man gives them a train time off the timetable for 1925 that they begin to think something is horribly wrong, as indeed it is.
On the subject of societal expectations, the brother and sister aren't sure what to make of the two people they meet at the station: since they are merrily carrying on as if 1925 has never ended, there is a very good impression given that they think they are bonkers. Or at the very least that it isn't a good idea to get on a train timetabled for fifty years ago! The arrival of the train crystalises the brother and sister's suspicions that all is not right - the train is steam, the lamp is oil, and in fact all the fixtures and fittings of the station are set decades in the past. When Gerry finds that he has been talking to someone on a disconnected telephone he begins to wonder what on earth could be going on.
Theis Shadows draws on the elements of horror found in the railway station genre of films. A small country station is that perfect closed setting and in fact in this show the protagonists get shut in to the station and can't escape. Whatever is happening there, the station clock is lying to them and it has the power to stop a real watch from working. When they find the events of the night in a newspaper dated fifty years before, the show becomes genuinely sinister and frightening. It does a very good job of making the viewer unsure of what is happening and therefore also fearful of what may come next.
I won't say what does happen next, but given that this is a children's programme, it would rightly be setting up its viewers with a folklore of ghostly things happening, and perhaps even a lifetime's interest in weird shit! I actually can't criticise this episode at all - yes, it has a small cast and only a single setting, but that is deliberate to create an atmosphere of claustrophobia. The pace is of its time, but it successfull creates the suspense in the viewer. You may criticise that it doesn't ever explain *why* the events of this show happen, but personally I think that is good because it leaves the viewer's imagination free to imagine what happens next.
Although what comes next after watching this, if taking the bus instead of the train, if you've got any sense...
70s TV Shadows