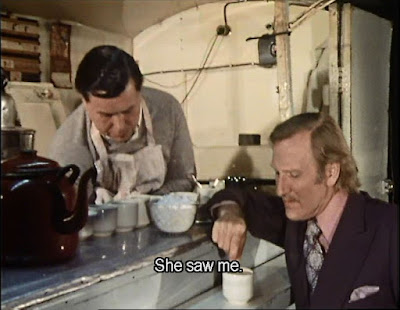 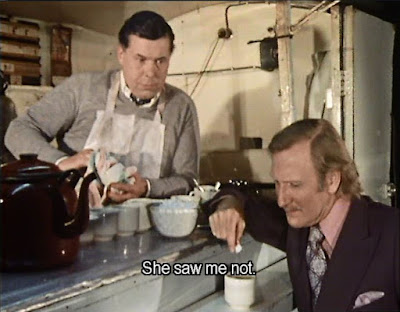 True to form I have got distracted from The Omega Factor before I got to the end of its episodes. And I've been distracted by Casanova 73. I like a nice seventies sex comedy me, so it rather looks as if the subject of sexiness has come up again on this blog. Pish. Tush. Can't be a result of my mind at all.
In all seriousness, though, without looking at the sex comedies, it's a bit difficult to get what the seventies were like at all. I read somewhere that one of the Confessions films was the highest-grossing film of 1974, which very much shows what the age was about. Elsewhere on this blog I have touched on the parapsychology of the 1970s, and in my series of posts on 1970s TV shows I have touched on the sheer dreariness of the 1970s. I have a feeling it was the sexiness which made the age liveable for most people. I say sexiness, rather than actual sex, because much of the point of Casanova 73 is the way Henry Newhouse lives in a way which is respectable. I have a feeling that probably the majority of this shows viewers also did at the time. The point for Newhouse is that he leads a double life - in addition to his respectable marriage and job he doesn't half get a lot, which never fails to get him into trouble.
While on the whole I don't like sitcoms, seeing them as uninteresting and based on the reality from which TV for me is the escape. My sort of TV shows things which are not representative of the viewers' world, and like the parapsychology I don't think Newhouse's sex life was representative of most people's. While this is obviously a sitcom, it is in a different league because the situation is not exactly kitchen sink.
Another thing which puts Casanova 73 into a class of its own is that I think I can watch pretty much anything with Leslie Phillips in it, because I love his gentleman-playboy persona so much. I know this is an exception to my usual policy of not liking actors reappearing in things, or who are always obviously themselves, but you won't find anywhere on this blog that I make any promise to be consistent! Phillips's persona is so fitted to the role of Henry Newhouse that the role fits him like a glove. He drips charm at every step. I have actually known a man who seemed to be a sex magnet for women - at the time of writing his latest girlfriend has just given birth to the fifth of his children (who have four different mothers between them), and I am interested in how ambivalent he is about his attraction to women. Similarly to Newhouse he drips charm when it suits him and in fact had sex with my old boss (whom I loathed) in the workplace. In an abrupt change of direction I may have to admit that there is an element of reality in Newhouse's antics, but they are not the norm for the majority of people. My friend is rather keen on not getting a reputation as being a womaniser (too late) and in Casanova 73 it is astonishing that Mrs Newhouse never seems to see what is going on, since as is the case with my friend, it must be obvious to her what is going on.
In addition to Phillips's characterisation one of the things I like best about this show is the 1970s setting. It's a prosperous 1970s setting and the Newhouses' house is decorated with the latest furniture and decor, which in its period somehow doesn't seem tacky. These shows serve to show what life was or was not like in the 1970s, and this also goes for the fashions and decor of the time. The cars are new, as are the buildings, the clothes, and what have you. I particularly love a scene in an Italian restaurant where Newhouse is showing his female companion how to eat spaghetti - oh for the days when spaghetti seemed like a foreign food which required lessons in how to eat it. I am really going to stick my neck out and assert that Casanova 73 portrays a lifestyle which was one to be aspired to at the time. And now I'm going to stick my neck out even further and suggest that the point of the 1970s sex comedies was that the sex was also something to be aspired to. Given the respectable married background of Henry Newhouse perhaps what was to be aspired to was actually liberation from the societal norms (reality) which defined previous generations into a world of free sex (the unreality). This is demonstrated in an ongoing series of spats between respectable society and Henry Newhouse with his libertine lifestyle.
If you haven't seen this show, I think it is best approached as the romp it is. There is no way this show was ever intended to stand up to any great scrutiny, although to be frank I think there's some quality writing going on here. It's written by Galton and Simpson, so what would you expect? Their script allows room for Phillips to flex his character and lifts what would otherwise just be a little frippery into a better-quality class of TV. Production values are very much of the time - if it wasn't a good script and very funny, it would seem rather slow. The colour palette is the characteristic 1970s one I keep banging on about here. The restoration is excellent. So my advice is to sit back and enjoy it, and whenever you laugh say, 'Ding dong!
70s TV Casanova 73 Comedy