The Prisoner: The Laughing Prisoner 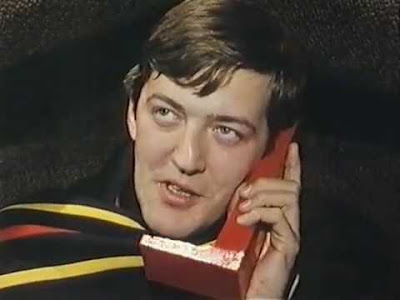 I was very pleased to find today that the Laughing Prisoner is back on YouTube in its entirety. It vanished for quite a time because a DVD release was mooted, which it seems has never transpired, so some kind soul has uploaded it again. As I am writing this I am watching it for probably the first time in thirty-five years and marvelling on the effect this spoof has had on me. Picture it. The 1980s. In Britain we had four television channels for the first time ever and there was some difficulty filling them with material. Channel four quickly became known for its arty and risque content, amongst which was the show which created The Laughing Prisoner, The Tube. I remember not liking The Tube very much, but obviously there was something in the zeitgiest which created the best parody of The Prisoner ever. The fact that the then young crowd felt they could parody a TV show from twenty years before was that at the time much of the television of the 1960s was being mined to fill the schedules of the TV channels - I think there may also have been a showing of The Prisoner to mark its twentieth anniversary. The two things came together, and this was the result.
I don't know who had the brilliant idea of casting Stanley Unwin as Number 3, but the choice is so successful that it creates a marvellously ridiculous atmosphere. I love particularly that footage from The original Prisoner is interwoven to give the illusion that Number 6 is still imprisoned there since the 1960s. As Stephen Fry says, nobody has ever got a thing out of him, and frankly The Laughing Prisoner gives an impression that all the inhabitants of The Village are rather deranged. Number 6 is shown fighting with Rover, who elsewhere has become a good pet, who Stephen Fry takes for walks.
There are other things changed from the original series. The bleakness of the scenery and the difficulties that must have been experienced maintaining Portmeirion are much more apparent here: gone is the happy sun-filled Village of the original series, and it is replaced by a much bleaker world. This, of course, makes The Village much less frightening than the manufactured spontaneity and happiness of the original. The gloom is lifted by the musical interludes - I imagine they are there because The Tube was primarily a musical show.
When I watched this show last, I had not had the experience I had at the end of last year of resigning. My employers didn't need to ask me why, my 2,000 word letter of resignation told them in great detail all my dissatisfactions going back for sixteen years. I don't therefore need to fear that I will be taken away to a Village and pressed to reveal why I have resigned, but I am nonetheless myself in the position of Number 6 (or Number 7 here). My point is that the act of resignation puts you outside of The Establishment, who can then feel free to punish you. Of course in The Laughing Prisoner it is apparent that there are only three resignees and two of the three are doubtfully sane. The Laughing Prisoner also shows the temperamental and petty nature of The Establishment's hatred against those who abandon it, something which is left ambiguous in the original series. In my own case, fortunately my industry in this city is largely split into two organisations and I have moved from one to the competition, and a surprising number of my former colleagues are texting me asking to be kept posted on vacancies...
The Laughing Prisoner moves faster than the original series because (in my humble opinion) it isn't mainly setting out to create an enigma but rather a set of pastiches of aspects of The Village. What it does show up very clearly - despite the already archive quality of the 1980s show - how bad the original footage was at that time, in comparison to the fully-restored look we are so used to today. It looks awful. It's crackly, the colours are bad, in fact it looks like I remember The Avengers looking in the 1980s. Lucky us, with technology moving on as it has. And (this really is going to sound ridiculous) I had forgotten how big hair was in the 1980s, on both men and women. That is so embarrassing to say! But it again highlights the bleak, austerity-driven world we live in now. Perhaps it was my age, but I remember the 1980s as a time when things felt possible, when it felt as if the prosperity dream would never end, it felt as if you could do pretty much anything you wanted... The reality reminds us of the injustices and pain of the time, but also prevents the freedom we felt at the time.
This all-pervading unreality is the theme of The Laughing Prisoner and what I love absolutely best about it is the way the board of Channel 4 are all cardboard cut-outs.
I so badly want a Prisoner chair now.
60s TV The Prisoner