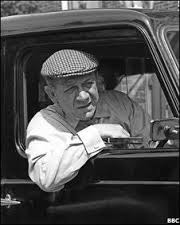 I write today about the only remaining episode of a show I didn't even know existed until yesterday. The show was called Taxi! The remaining episode is called The Villain. I came across it because it was largely a vehicle for Sid James, one of my favourite actors. You can see this episode on youtube should you so wish.
It seems (according to wikipedia) the show was built on the propensity of London taxi drivers to tell tall stories. James features as Sid Stone, who owns the taxi company and shares a house with some of the other drivers. This remaining episode is from the first series, which was broadcast over the summer and had poor ratings; the completely-missing second series introduced more characters and therefore variety.
Taxi! raises a question for me personally: where does it stand in 1960s TV terms? I find it very difficult to place in comparison to the rather exotic offerings I routinely watch. It is from 1963 and is therefore pre-Emma Peel Avengers-era, and show none of the sexiness and adventure even of the early Avengers. One thing I would definitely say is that Taxi! shows itself for the BBC show it is: the majority of shows I blog about here are ITV shows. Taxi! feels much more like a stage play converted to the screen, which is a salutary reminder for the modern viewer that that is actually how TV was seen by the people who made the shows.
On another level, Taxi! is like many another drama (or possible sit-com) set in a particular work place. Hospitals and police stations are always good for human drama. Taxi! manages to spell out the central dilemma (through the mouth of James) very well: at what point do we put our foot down with other people, even if it means they have to take the consequences of their actions? The particular dilemma here is that Sid reports another driver - a man notorious for bullying other people and just pleasing himself - to the police with the result that he loses his license. This is naturally criticised by the other drivers, who have a (perhaps misguided, depending on how oyu look at it) loyalty to the profession above everything else. This action is despite the fact we see Sid cheating a tourist out of a return fare to the airport - the charge comes to £2 and how I wish that would get you further than the nearest lamp post these days!
There are all sorts of other ways in which this show is redolent of its age. Sid tells one of his drivers that he simply must get a radio in the cab if he wants to get ahead. Sid goes to the police station and the desk sergeant (a vanished species) knows immediately the particular case he is talking about and says he will see what he can do about getting the charges dropped. The sets look like the interiors of houses in Avengers of this period. The telephone numbers and exchanges are the old ones which not even I remember. The taxi drivers all have actual shirts on - no t-shirts or tracksuit bottoms in evidence!
This show is also an interesting mixture in terms of production: while much of the action very obviously takes place in sets, the external shots are of very good quality. In terms of production values, as I say you should expect a much more...I suppose the word is 'worthy', production than many of the shows I write about here. My one real criticism is that the story is rather confused by the introduction of a woman - the plot gets back into its track OK, but the introduction of a romantic interest isn't enough for those who want to watch romance, and detracts from the main thrust of the plot. The self-serving driver gets his comeuppance when one of his women meets his wife and he faces a far worse worse fate than the law can ever throw at him.
I have no idea how the one episode has remained - who kept it, how it was saved, and so on. I can say with certainty that it is incredibly well-preserved for an odd episode of a nearly-forgotten series. Would I want to watch the rest of the series if it existed? Probably. I don't think it would be a keeper, because of the relative simplicity of the plot. I would watch it for the 1960s milieu and background, and hope my readers do too.
Image: Sid James in Carry on Cabby
60s TV Orphaned Episodes Taxi!