George and the Dragon: First Impressions 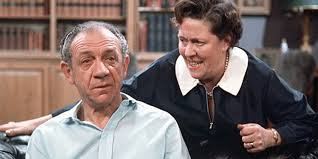 I am stuck at home sick, having managed to scratch the surface of my eye. It is getting better slowly but be prepared for this post to be even more eccentric than usual, at least in spelling and punctuation. It has given me time to indulge in this new-to-me series, which I bought largely on spec on the basis that I tend to like things with Sid James in.
I am ashamed to say that while I was obviously aware of Peggy Mount's existence, I don't think I have seen much with her in, except for some episodes of The Larkins (which I downloaded and are waiting to be posted about here). I am interested to find that she is a very interesting person, whose life was marred by a wildly unhappy upbringing – she got into acting largely to get away from this upbringing, because her mother told her she would never amount to anything in comparison to her sister. She did that thing which is probably one of the most difficult human actions – she cut off all contact with her birth family in the 1940s, later surrounding herself with an adoptive 'family' of more positive relationships. It must have been extraordinary for her birth family to see her on the telly, but of course if you don't want to risk your child cutting you off, you don't treat the child that badly.
The underlying sadness to Mount's life of course is in opposition to the fire-breathing characters she tends to play. It is evident that this was not character casting, and in fact the Dragon character here is not half such a dragon as she's made out to be, rather she is kind and has a heart of gold. You can meet much worse dragons any day off the week (I recently overheard one of my current colleagues saying that she had told her son's girlfriend that if push came to shove he would choose his mother over his partner and the mother of his child. Asking for trouble, that is).
The fundamental relationship in this show is that between, well, George, and Gabrielle Dragon. I was astonished to read that this show was broadcast as laste as 1968, because the success of the show is dependent on the fact that nothing is ever going to happen between those two. There is clearly a romantic and sexual chemistry between them, and much of the action is based on the to-ing and fro-ing between them. The subject of sex comes up repeatedly and yet, and yet…in comparison to The Avengers this show seems so old-fashioned. Admittedly comparing this show to The Avengers is hardly fair, because nothing will ever compare to it, but I think there are other 1960s series which make George and the dragon look like a 1950s relic.
There are other ways it seems like an older TV series than it is (this is not a criticism, merely a statement of my perception). The Colonel's household is so old-fashioned just in terms of staffing. Sure there are people who can still afford to employ a housekeeper, gardener, and chauffeur, but I feel that sort of household better represents an age of fuller employment and lower wages.
The show's production values also represent an earlier age in television than 1968. It is completely studio-based, with no external footage at all. I like the sets a lot – I like the looks of the 1960s interiors which are aiming for traditional rather than modern. I like the way smoking is mentioned casually, as just something people did rather than the self-conscious smoking you would find in Mad Men. Despite my conviction that this show represents a slightly earlier era in TV than some of the up-to-date shows of 1968, I have afeeling that it probably better encapsulates the way of living of most ordinary people in the 1960s. Were long players available in the 1960s? I'm fairly sure they were, but Gabrielle is passionately attached to mer mother's old 78s which get broken in one episode.
I have a feeling that normally this is a show I wouldn't take to – that is you think of it as a situation comedy. But George and the Dragon manages to hold my interest largely because of the chemistry between the characters and the relatively fast pace of the stories.
60s TV George and the Dragon