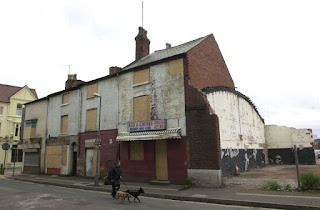 You will see that I have changed my profile picture: a bare chest made it difficult to comment on other people's blogs and you will see that I have on a Birmingham City Football Club shirt, which reminded me I had series 2 of Peaky Blinders to watch.
First things first, I have to confess to not getting on very well with Peaky Blinders and I can't think why. Naturally it has been watched and talked about at length locally. There has even been a bit of a trend for flat caps.
The elephant in the room with the peaky blinder thing is that it isn't true. The gang the story is based on were around in the 1890s, not the 1920s. It is unlikely they used razor blades at all, as they were luxury items.
Don't get me wrong, there were areas of this city at that time where the police just didn't go. There was also a myriad of geographically-based gangs.
There's also something wrong with the way the show looks. To this day, I can show you real poverty in this city. At the time Peaky Blinders is set people lived in slums. The illustration to this post is one of those slums, as it was before the National Trust opened it as the Back to Backs museum. Peaky Blinders looks too clean, too spacious, too light: all things which come at a premium.
One thing I will say of the second series over the first: they've got the accents better. The predominantly Liverpool accents of series 1 are gone. The local detail is also just right.
If it's any consolation to the die-hard fans, I may seem negative, but a show only gets blogged about here if it isn't a complete dud!
Peaky Blinders