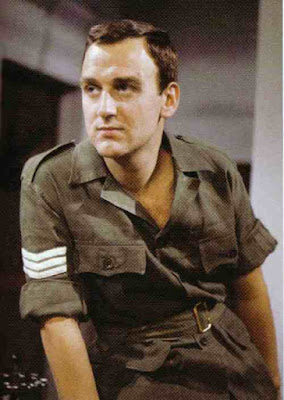 A fortnight into my new job, which is much better than my last one, I have got enough energy to think about a blog post. I have repeatedly put off buying this series although it comes up regularly as a recommendation for me on Amazon, largely based on the reminiscences of army life often found in online reviews. My own interest in cult TV was first raised by the repeats of The Avengers screened in the early days of the UK's Channel Four and can only approach the shows I write about here with any reminiscence once we hit the 1970s. I do not find reminiscence for national service or the glorification of armed service sympathetic and can tend to be put off by the attitudes it engenders.
Yet yesterday I found myself in the Entertainment Exchange Leamington Spa and read the blurb on the back of the box. I have a feeling there is somebody in Leamington with very good taste in television indeed, because that shop has introduced me to many a new TV series. I was surprised to find on the basis of the episode summaries that I was interested in this series and that the episodes gave the impression that they were more about detection and the sort of human problems which interest me, than about the army life which some of this show's fans so appreciate.
First things first. I was surprised to see that this show was originally broadcast in 1964. I think it may be my lack of attention to the small print but the show is in black and white, which of course isn't a problem for me, but I was fully expecting it to be in colour, on the basis of the stills on the box. Naturally the box says the show is in black and white and given that fact I suppose it isn't really naughty to put colour stills on the box, but nonetheless it came as a surprise. Each episode opens with the Cathy Gale-era- Avengers ABC jingle. In fact, this show is in sound terms surprisingly like the early Avengers, because it uses some of the same sound effects. As is the case with all of the ABC series of that era, the titles are vibrant and effective in a way which naturally looks old-fashioned now, but was probably high-quality graphic design at the time.
I suspect another reason I've put off buying this series is that it stars John Thaw, and everyone knows that I don't like actors re-appearing over and over in shows. 'Did you watch that thing with Benedict Cumberbatch last night,' people say, and of course the answer is no because Benedict Cumberbatch is always Benedict Cumberbatch. I am relieved to find though that John Thaw isn't that unwelcome to me in this show. I suppose this was made before he became a National Institution and Much Loved Figure, plus of course he younger and playing a younger character, but he comes across rather differently in this show. His presence and energy are different, it is not just a matter of him playing a different role from the rather acerbic senior roles he became known for. Perhaps it is genuinely that he hadn't matured into his later acting persona, and so can seem quite different. His role here is not lacking in depth, though, and in particular there is an undercurrent of anger to his character which I find interesting: this is exactly the short of character I like, one who recognises when there is something wrong and won't shut up about it.
In addition to Thaw, this show has a cast of differing guest stars each episode, which can only be described as star-studded, although probably the Names only became well-known afterwards. The Names would include Tenniel Evans, Yootha Joyce, Leonard Rossiter, Ian McShane, Mike Pratt, Warren Mitchell, Hywel Bennett, and Colin Blakely. Since at the point of writing this I am just nearing the end of the first disc of four, this list of stars has had the unusual effect on me of making me want to see the roles that these actors play in their respective episodes, since they are sure to be very different roles from those they are best-known for.
There is also a broad spectrum of 'issues' dealt with by the various episodes, including rape, colonialism and racism, black market trading, and the ongoing effects of Britain's relationship with Germany in the Second World War. Naturally all of these are within the context of the army, but personally I don't find that distracting from the actual subjects under investigation. This is far more a human interest show than one about army life, and so I am finding that I take to it.
As usual at the time, the episodes, at least the ones I have seen so far, are almost completely studio-based. Naturally coming from me that is not a criticism. The episodes take the form of three 'acts', familiar from The Avengers. I see that the producer was John Bryce, who unbeknown to me was a producer on The Avengers until he got the push. I feel the episodes have probably had extensive restoration: except when you pause it the picture is as crisp as it is ever going to get in TV of this age. It would be churlish to be over-critical of the odd patch where the sound is a little noisy. Perfectionists should avoid fifty-year-old television.
All in all, Redcap is a series which I am looking forward to delving in to further, and I may even splash out for series 2.
70s TV Redcap