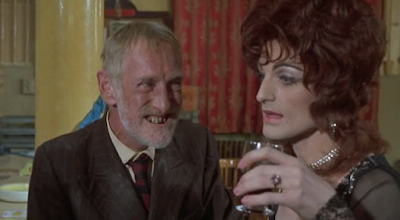 Back to the 1970s today, and while I will grant you that Steptoe and Son was a series which spanned the 1960s and 1970s, I am mainly interested in the first of the two spin off films here, which is also called Steptoe and Son, and as so often on this blog, not really for a very obvious reason, but we will come to that.
I had better begin by making a disclosure that I have never really taken to Steptoe and Son. If I'm frank it is because Steptoe senior is way too much like my own mother; unfortunately for this reason I can never find entertaining his continual manoeuvring to keep his son under his thumb. It is far too near the bone, and in this film he actually does something which my own mother would do, namely pretend to be ill to get his own way, having prevailed on his own son to take him on honeymoon! Personal concerns apart, the subject of this film is really a domineering father who will not let his son, who is nearly forty, grow up or get away from him.
There is a wildly Fruedian irony that while the father isn't above going to see the stripper himself and actually leers over her, it is actually the drag queen he falls for! I love that the underlying sexuality of this is actually so conflicted and while Steptoe senior has obviously at some point been married to Mrs Steptoe, it is actually a man he falls for, and he doesn't like it when his son marries the stripper, who is at least very obviously a woman!
What made me watch the film was that the drag queen is played by Patrick Fyffe, billed as Perri St Claire, who with George Logan was part of the drag act Hinge and Bracket, whom I have always loved and can't believe I have never blogged about here. Fyffe started his work life as a hairdresser and appeared in the local amateur theatricals before making the move to rep. I feel that this film actually shows Fyffe's worth as an actor, since the role is quite different from Dame Hilda Bracket. 'Arthur' is a much more obviously gay character than Dame Hilda, and to me this is apparent from his very first appearance (in drag but speaking as a man) when Steptoe senior falls for him, which underlines the irony of this and the underlying sexual ambivalence.
The plot of the film is predictable. I mean, we know from the initial lines with father and son bickering about the failed marriage that there is no way son is ever going to get away from father. Nonetheless this film does have a charm, and I find the charm in a series of little tableaux. I love that when Steptoe is bathing in the sink there is a box of Omo on the draining board (which it is still sold in some parts of the world Omo is a long-defunct brand here). I love the touch of Son going to Arthur's flat to see if he has any rags. I love the scenes in clubs of strippers and brawling. I love that Zita has the baby hidden away in the dressing room while she is performing. This film is not without charm, although I was mainly interested in seeing it for one character only!
Reading the other reviews on the internet, it seems that this film is a firm favourite with the fans of the show. It is also a firm favourite with the fans of Hinge and Bracket. Just be careful watching it if you have a clingy parent!
70s TV