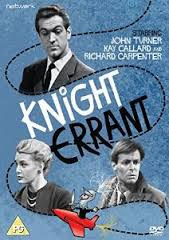 Following my last post about secrets, lies, and my resignation without notice from my employers, I am delighted to move on to a post about adventure and to announce that a mere nine days after leaving my job I have been offered another one. With a better employer, slightly less money but then you can't have everything. In fact my friends who still work for my last employer are all green with envy. And since my claim for a large amount of money for constructive dismissal and disability discrimination is with the arbitration and conciliation service which is the first step towards an employment tribunal, I doubt they will be ill-advised enough as to try to give me a dodgy reference.
Anyway, Knight Errant as it stands is the remaining two episodes of two slightly different shows with the same theme. Long before Midsomer Murders, it managed to continue into a second series with the loss of the lead actor.
It is mainly of interest as far as this blog is concerned, as a possible precursor of The Avengers. By that I don't mean in terms of plot - while there is some avenging going on, the main premise is more one of adventure and service - but I mean in terms of atmosphere. This is very much the world in which the early Avengers takes place, which as usual is best seen against the backdrop of the tatty world of 1960s Britain, albeit this show was filmed at the end of the 1950s.
The main problem with this show is that while the favourable reviews on the internet are truly glowing, the unfavourable reviews are truly awful, largely for the reason that no more of this show remains than the two episodes on this disc. My personal opinion is that the criticisms of slow pace, poor production, wobbly scenery should be ignored, since the production values and so on are not abnormal for television of this age. This show only appears an also-ran if seen next to later TV. My real criticism is that it is only possible to see these two episodes, which provide a tantalising taste only.
My verdict on this show is that it is quality TV, a worthy predecessor to The Avengers and an interesting taste of what creative television was like in the time just before most other shows on this blog were broadcast. Sadly because there only remain two episodes, it is not possible to get more than a taste, and I feel this fact means that the disc, while not expensive, is relatively overpriced. I'm actually going to sell the disc since I have given in to the lure of Ghost Squad at long last.