Railways on TV: 'The Railway Station/Assignment Two (Sapphire and Steel) 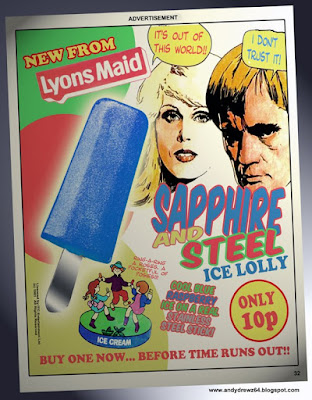 I have posted about this Sapphire and Steel assignment here before, episode -by-episode, and I have made a conscious decision not to re-read those posts before writing this one.
There is a sense in which all the locations of Sapphire and Steel adventures play at least one role which railway stations or trains often play, that of a contained environment in which the action can take place. This pertains for the house, the block of flats, the garage, and so on. But this function is extended in Sapphire and Steel to become a plot device where this contained environment can be attacked by forces outside it, usually time. This is a very imaginative way to capitalise on a relatively cheap setting to produce, and its low cost is documented as being one of the things which made Sapphire and Steel attractive to start off with. It is also what makes this show so different from a straightforward detective -type use of the train to create a closed environment. Unbeknown to me, there is a term for this used in TV: tvtropes refers to it as a 'bottle episode ' and comments on these episodes' difficulty, surely a tribute to the excellence of Sapphire and Steel:
' Bottle episodes are known as a challenge and/or a chore, depending on the writer. Since most/all of the episode is set in a single location (sometimes even entirely in one room) with a smaller than usual cast, the dialogue (regarded as one of the harder things to write) needs to be better and tighter than in other episodes since the writer can't really do anything else with the cast. Depending on the writer and how well the premise works out, bottle episodes can range from terrible, to some of the best episodes of their shows and even their franchises.' ( http://tvtropes.org/pmwiki/pmwiki.php/Main/BottleEpisode and I love the list of general tropes used in the series at http://tvtropes.org/pmwiki/pmwiki.php/Series/SapphireAndSteel )
Sapphire and Steel also uses the bottle episode idea differently from many other programmes, since the whole series consists only of bottle episodes and so they are not used purely for character development. Rather the bottle provides the setting into which some anomaly has intruded and Sapphire and Steel also enter the bottle to put the anomaly right. They constitute a surprisingly conservative force, who in this assignment are juxtaposed against the apparently conservative figure of the 'old' ghost hunter. This one is all about age in many ways.
The assignment also repeatedly references a world outside the 'bottle' setting, in the shape of the darkness, the order restored by Sapphire and Steel, and in the disordered time. The enclosed setting of the railway station is therefore invaded by multiple competing forces from outside.
Speaking of time and tropes, I see both that a major trope used in the audio productions of Sapphire and Steel is called 'humans are morons ', and also that Sapphire and Steel is set for a remake. Yes, I am connecting these two things, because without a modest approach to special effects, Joanna Lumley and the slow seventies pace, the things which make Sapphire and Steel will be missing. Nonetheless I'm intrigued to see what will be done to it!
Image credit: http://andydrewz64.blogspot.com/2015/06/the-original-dalek-death-ray-ice-lolly.html