Railways on TV: Dressed to Kill (The Avengers) 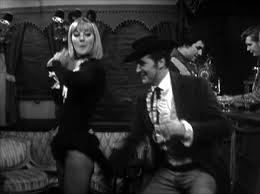 I find that this Avengers episode was one of the first shows I blogged about here ( here ). Naturally I don't feel that what I said there can be improved on in any way,  but I do want to at least touch on Dressed to Kill in this series of posts on railways and railway journeys.
It has made me think of the role train journeys can play in films and TV shows. I have already touched on the role of the train creating a closed environment,  most useful in a whodunit as providing a limited pool of suspects. The fact that trains make journeys provides an allegory of change - almost what would be called pilgrimage in religious terms. In Dressed to Kill the passengers in one carriage alone are deliberately separated from the rest of the train and then left in an isolated place where they can't threaten the villain's plans. 'Its a bit quiet for Wolverhampton, ' indeed.
The pilgrimage aspect of train journeys is paralleled by the more supernatural associations of the railways. Many legends of ghosts revolve around trains and stations. Here in the Second City we have the top-hatted figure seen so often at New Street,  but alas never by me. These liminal associations lead naturally to the idea of trains and stations as links between worlds and dimensions,  a role perhaps best seen in the Sapphire and Steel adventure set in a station. It is also clear that the railways instill their own... I'm not sure what the word is... Passion? Mania? It was obvious that the man in A Funny Thing Happened had fallen for the romance of the railways in a big way and it had taken over his life. Beware if you think of train spotting,  you never know what you might be letting yourself in for!
Image credit: http://www.dissolute.com.au
60s TV Railways on TV The Avengers