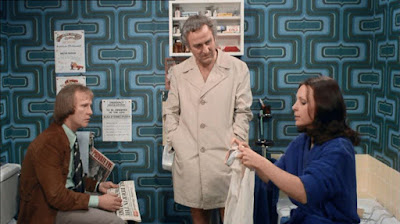 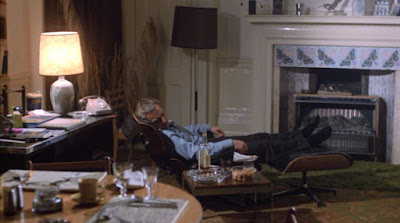 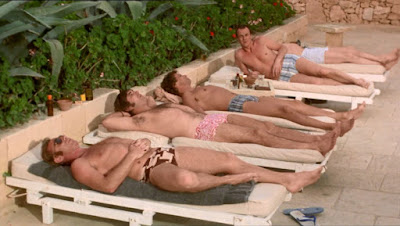 I touched briefly on The Sweeney, when I did a series of posts on 1970s TV shows earlier in the year. Re-reading my post, I find that I was mainly interested in the historical context of the show, making reference to the contemporary history in my local area. To tell the truth, I have never actually got on well with The Sweeney. I thought for a long time it was because one of my old neighbours put me off it by describing it sneeringly as 'very old fashioned', and recounting how she and her partner, who likes it, would fight over the remote interminably until her got so drunk he would go to sleep and then she would watch what she wanted.

Unfortunate and largely irrelevant associations aside, I didn't realise that The Sweeney also spawned two films, the subject of this post, and through watching them I have discovered what I think is wrong with The Sweeney. The show is much better served as a film than as a TV show. There, said it. These two films are basically Sweeney episodes, with the same characters, same milieu, etc, but in my humble opinion flow much better than in the TV episodes. The acerbic Regan is not well served by the TV slot medium: he comes across as too acerbic and does not have the opportunity for character development afforded by these films.
This development is most helped by the sub-plots possible in a film, although the basic gritty premise remains unchanged. This is London of the 1970s, and it's rough as a bear's bum. The basic subject of these two films is really police corruption. This was of course a major public concern at the time – and the real history behind The Sweeney includes many a resignation of a police officer and repeated scandals. Nor is the rest of gritty reality ignored: the illustration to this post is Regan in a bathroom with a high-class prostitute. There is porn, corruption in high places, you name it. I always find it interesting how 1970s TV managed so effectively to combine fascinating glimpses of the rich and privileged of the time, with a view of how that world interacts with the desperate underbelly of society. This in a sense breaches the real/unreal divide that I am so fond of, since both sides of this divide are naturally somewhat unreal to the other half.
To anyone my age or older, these films are a visual delight. One of the reasons I chose the bathroom picture for this post is the truly awful wallpaper. The locations are expertly chosen, the clothes are ridiculous, the interiors are tasteless. This is a retrospective of the 1970s at its best. My main concern is how any film of the time would have coped without a concrete multi-storey car park in which to have a chase! The cars are a dream of reminiscence, in fact at one point there is a scene in a scrap yard which would be a delight to any classic car enthusiast. Te films also serve as yet another reminder of how awful British cars were at the time, since at one point a Morris Marina is written off. Anyone remember those? Thought not, but my godmother had a gold-coloured coupe.
I would have to admit to a certain ambivalence about John Thaw in this, since for me he is only and ever Inspector Morse. I find it interesting how Regan almost provides the other side to the apparently more refined Morse character; the other side because in terms of being antisocial there really isn't much difference. It is strange to see Thaw smoking, given that he died of throat cancer. I see that he smoked from the age of twelve.
In the manner of the time and the straight-up nature of these films, sexiness isn't lacking. In line with the 'topless on TV' undercurrent here, I see that even though this disc is an 18 certificate, the nudity is described as moderate, in comparison to the language and violence which are described as strong. There are glimpses of breasts at various points in both films, and in one scene the entire criminal gang line up supposedly in the sun (although they look very cold) in wonderfully 1970s swimming trunks. The depictions of sex are rather ambivalent – Regan at one point gets off with the posh tart, while Carter is also seen in bed with a woman. Regan makes it quite plain that he is happily divorced, and judging from the horseplay depicted in the office at one point, this is a very male team, hard-working, -playing, -drinking, …you get the idea.
All in all I would strongly recommend these films over the TV series of the same name, although of course I'm going to have to look it up again now to make sure I'm not doing it an injustice.
70s TV Not TV Topless on TV