Apartheid in The Prisoner: Hammer into Anvil 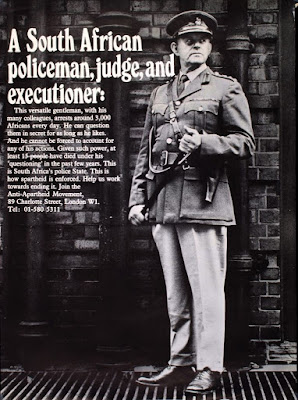 Periodically the question comes up in the classic TV blogosphere, of the standing and worthiness of television viewing. Could one put it on a CV as a hobby? Or would that risk being interpreted as meaning the person is a couch potato? Certainly there are different ways of watching television and engaging with the shows that one is seeing, and by a strange coincidence I have recently proved the utility of television viewing to myself, with a link to this episode of The Prisoner, and even to allusions to apartheid!

I have been somewhat silent here for a little while, and rather than just be silent I will say that this silence was caused by a spot of bother at work. Another one. My 'manager' is completely ineffectual, determined to get rid of me, and periodically has a go at trying to push me through the door, which always end in her looking stupid. Some people never learn. Naturally the only parallel here to the kind of risk under which those who suffered under South African apartheid lived, in the need for tactics in overcoming a hostile, dangerous power. I would argue that this episode could almost function as a perfect primer in resistance and causing confusion in a powerful opponent.
These are also of necessity the tactics used by those who resisted apartheid. There is a necessary power play involved here, and just as in Hammer into Anvil, it so happened that the powers that be in South Africa were under pressure from outside as well as from their target. 'I'll break you, Number 6,' says Number 2. That is his mistake, because the almost hysterical tone of voice in which he says it, shows that he is not actually in control at all. At the time this episode was made, apartheid was at its height and the South African economy was at its strongest: by the mid-seventies it was apparent that the cracks were showing, and just as with Number 2, the weaknesses only had to be seen to be exploited.
Number 6 starts on a campaign of what I can only describe as 'keeping them busy'. I think it marvellous that the mere act of sampling gramophone records could have such an explosive effect. Of course this kind of civil disobedience would have been difficult to maintain in South Africa, but once actual resistance started, the government's reaction, to impose states of emergency and so on, was even more criticised by the outside world, leading to an increase in external pressure. I personally used almost exactly the same technique by managing to draw attention to things she was doing. Already under pressure from her manager as a result of not doing appraisals, she is also now facing an enquiry into her mismanagement over a period of years. Oh, I could tear my own tongue out.
I love the blank sheets of paper trick. The thing is that Number 6 isn't actually doing anything at all, he's merely putting papers in the boat. From that point on, the technique moves into actually driving Number 2 off his rocker, and remarkably successfully. It is of course essential to 'reconnoitre' the entire situation when working to change regime, to avoid unexpected consequences. Number 6 has successfully identified that he is actually too valuable to The Village authorities to be killed or actually broken. I feel that in this sense the actual point of The Prisoner is exposed: the authorities want Number 6 to tell them the information he has, this information is obviously valuable. The elephant in the room with The Prisoner, is what this knowledge is, and how you interpret the show is largely dependent on what you think the knowledge is likely to be. This idea of resistance and overtones of the apartheid situation I think makes the show much more pointed: in many ways Number 6 shows them what he knows. They think they've got all the information on him, but all the time he is watching the authorities much more systematically than they are watching him. The failure to check the facts of his birthday and Number 113, shows a remarkable sloppiness that Number 6 would never have fallen into.
Of course it is at this point that Number 2, buckling under the pressure, starts blaming other people. This is paralleled very closely by the response of the South African authorities to any resistance. 'He's out to poison the whole Village,' is stated as Number 6's intention, and naturally the intention of the resistance to apartheid had to be to destabilise the whole economy. Again it is necessary to decide on what losses you are prepared to bear before the battle, and the losses in South Africa were very high indeed.
This is the point, at the beginning of the episode, where this Prisoner perhaps has the loudest echoes of apartheid, more than any resistance or tactical manoeuvres. It is the 'suicide' in the hospital. It is somewhat anachronistic when talking about The Prisoner to use the example of John Vorster Square police station in Johannesburg as the example, since it was only opened at the end of the 1960s, but it became notorious for the kind of deaths in custody that the apartheid regime was expert at. Just as things were covered up in The Village – at one point revenge on Number 6 is planned in a way that could not be traced back to Number 2 – so these deaths were covered up with excuses which would be plausible if they happened rarely, but not when they keep on happening. These excuses became the subject of a poem:
In detention-Chris van Wyk