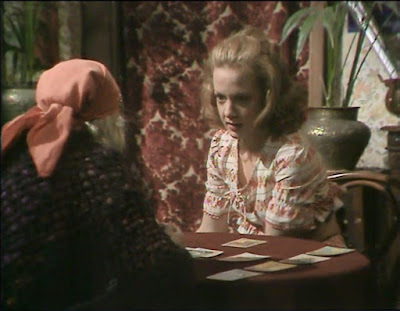 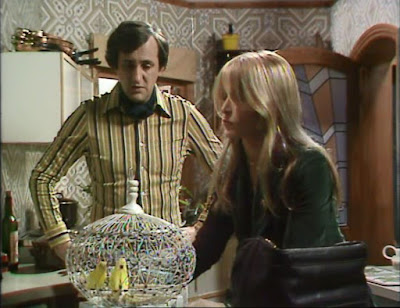 I have had this show on my list of ones I have wanted to post about, for some time, at least six months. What has prompted me actually to get on with it, is that considering I have watched the whole series several times with growing enjoyment, I have been astonished to discover the rather mediocre reviews on the rest of the internet. That seems to be the role of this blog – the present an unerring eccentric view of TV programmes, in fact one could almost say that it embodies my own opinions!

I get the impression that people penalise this show for several things – it seems that the scores on reviews are lower than the impression you would get from the actual review. So let's get the show's shortcomings out of the way first. Its production values are incredibly dated, even for 1974. It was shot on video tape, it is either completely or nearly completely studio-bound. The sets are very plainly just that – sets, including sets of the outdoors. To my mind, all of these things are the sort of things the fan of vintage TV accepts, or even appreciates. Having seen a film at the cinema yesterday for the first time in some years (it was Legend starring Tom Hardy as both Kray twins and I would recommend it highly), I have been reminded of how unreal CGI actually looks if your staple viewing is of the vintage mine is. I would grant you that the production of this show is more of ten years before, and this show bears no resemblance to the contemporary live-action shows. It feels much more like a stage play in pace and presentation.
A more valid criticism in my eyes, is that this is a series called Zodiac which only has six episodes, giving an impression of incompleteness. I have not been able to find a reference online to whether the full zodiac was intended, and it is not apparent from the available shows because they are all self-contained. I also get the impression from some reviews that this is a series which has a cult following and is considered a neglected gem in some quarters: in the world of vintage TV this reputation is one which is almost guaranteed to make a TV show a disappointment unless it is absolutely superlative.
I feel that where Zodiac fails to be a resounding hit with the vintage TV crowd, is that I for one am finding it very difficult to place it. Obviously in terms of this blog I have a ready-made label for this show in the form is 70s TV, but I would find it difficult to say that if you like such-and-such a show you will like this. Certainly, in terms of my own favourite division of vintage TV, into the real and the unreal, I would have difficulty placing this one. It is trying to be both at the same time. It is a police procedural, with occult overtones. These overtones are taken completely seriously, I should say, and played completely straight. The astrologer is obviously a sensible person who is capable of reasoning, to the astonishment of the detective at times. Unfortunately the launch into astrology and tarot would tend to put off the fans of police procedural, and the at times plodding work which goes with police work, would tend to put off the more flighty magical types. This is this show's biggest downfall – it tries to appeal to two different audiences at once and is bound to fail.
Otherwise, it is superb. Each stand-alone episode is well-plotted. What is not to love in top 1970s totty Anouska Hempel as the astrologer? Normally I would find the host of familiar faces in this one distracting but it works very well, because it is actually such a strongly-scripted show that the familiar faces become the characters. I have also been watching Anton Rodgers in Murder Most English (based on Colin Watson's excellent Flaxborough novels, where I find I reacted to his presence by thinking that he is never anything but Anton Rodgers. Here I find I forget that he is Anton Rodgers and play attention to the part. Even many of the guest actors in each episodes are great names of the time and none of this annoys me, who can't stand repeated casting of actors. Totally unreasonably, of course, since it can't really be expected that an actor can only ever play the one role for which he is typecast and never anything else.
Visually the show suffers from the porridgy colours inflicted on many 1970s shows, so that it often doesn't tend to look that interesting. The sets make up for this to a great extent by the detail and complexity of the 1970s tat. In terms of pace, the show is probably slightly slower than modern ones, but this is made up for by the sparkling tension between the two main characters.
So all in all, I wouldn't personally give this one that low a score. I would recommend it to the kind of people who like the kind of TV shows which this kind of blog features! My only proviso would be to remember not to expect to be able to place it in any ready-made box too easily.
70s TV Zodiac