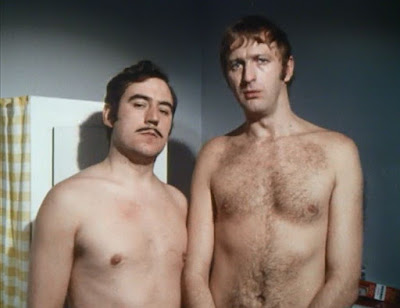 I'm a strange sort of cult TV fan – I'm not a fanatical Dr Who completist, for example. Another show which I do love dearly and which I realise I have never written about here, is Monty Python's Flying Circus. Come to think of it, I realise I have rarely written about any show which can vaguely be described as funny. Dick Emery has featured here, and I keep meaning to write a piece about local lad Tony Hancock, but on the whole my posts here have tended to be about my love for the weird and wonderful, which is on the whole an accurate reflection of my viewing. Of the comedy shows I watch fairly regularly, I think the only one which can be accurately described as 'cult' would be The Young Ones, and apart from one post I have fought shy of writing about that, since I could never do it justice. I also watch Bottom, Hinge and Bracket, To The Manor Born, Spitting Image, Hale and Pace, and French and Saunders. I was disappointed recently to find that I didn't think Victoria Wood had worn as well as I'd hoped.

I feel that probably humour is one of the genres of television that doesn't wear well. You will notice that the funny shows I list above are very much of one period, and of course it was a very formative period to me. Perhaps everyone has their own moment of humour, and perhaps humour either goes in such fashions that it does not travel well. Certainly when I recently posted about a show reminding me of the music hall tradition, I was finding that it didn't do anything for me at all. Mr Anthony Aloysius St John Hancock, and The Circus are, however, classics. I think the reason for the is the complete avoidance of contemporary detail, exactly the timeless which allows The Avengers, which really takes place in a time which never existed, to appear much less dated than many contemporary shows.
So what period does Monty Python take place in? I would venture to say that it is a similar temporal and geographical space to The Avengers. So many of the jokes are timeless that Monty Python can still wear very well. Of course, not forgetting the 1960s preoccupations which often come up in this blog, the concerns of progress, society, and so on are present in buckets. Monty Python satirises these concerns, and pushes it as far as it can. It is never prurient, never smutty, and it speaks to the ridiculous in our world. The picture which illustrates this post is from a sketch called full frontal nudity. The illustration that I really want to talk about is from a sketch about the dull life of the city stockbroker (since it contains bare breasts and I can't find any definitive decision on whether they're OK with blogger and I don't want to get an adult listing, I have posted it on my flickr  here ). The toplessness on TV is not gratuitous, it is intended to be completely out of place and thus shock the viewer. That would also be the case with the animated woodcut of St Thomas Aquinas being snogged, which I am watching as I write this.
I feel I actually asked the wrong question before – the correct setting for Monty Python is not a particular time or place. The correct setting is bright undergraduate humour. It is necessarily a young people's humour. To have the sharpness of attention and comment required to produce this you would have to be the brightest of the bright, incredibly well-read, in both literature and the newspaper establishment. It also requires a psychological insight I feel people rarely gain much before the end of their thirties: the whole point of the illustrated scene being part of the stockbroker's dull life, is that it isn't dull at all. The topless newsagent is there for him to see, but he doesn't. He's too busy looking at his newspaper and actually creates his own dullness.
I have also realised, watching through my box set for the first time, how badly-served Monty Python has actually been over the years, by being released in highlights and people's selections. I know I'm always on about how old TV shows need to be watched differently from modern ones, because of the complete lack of awareness in 1969 that this show could ever be watched back-to-back the way I am now. I also realise that the show needs to be watched in its integrity to get peaks and troughs in pace. Monty Python has tended to be caricatured by being cut up. Being watched at its own pace is the way to do it.
60s TV Comedy Monty Python Topless on TV