Doctor Who: Lost in Time. The Fear of the Vintage TV fan Reinforced 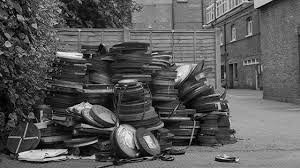 I realise I have posted quite a lot about the impact on the cult TV fan of the wholesale junking of much of the TV of the 1960s. If the TV shows you live are fifty years old, it is natural that you will fear that there is either nothing, or nothing of quality, left to be discovered or for you to discover. What if, goes the argument, my current collection of TV shows is the final collection that I will be left with for the rest of my life? This situation would present an interesting challenge to me, by way of being almost a canon as in scriptural terms, of approved television. Since I first posted on that fear, my fears were somewhat assuaged by the discovery of another new series that I had never seen, which is what my recent post about Special Branch, is about.