Apartheid in The Prisoner: Many Happy Returns 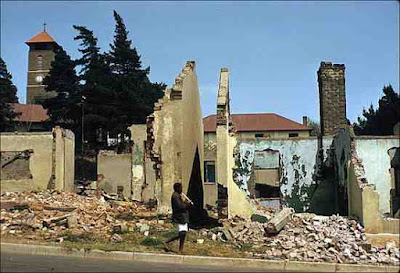 I have commented before in this series of posts, that it is possible to read virtually anything into The Prisoner if you try hard enough, and that is certainly true. Certainly the elements of apartheid relating to power, conformity, nonconformity, and control, all find very strong echoes in the dynamics of Number 6's experience. But I feel this episode takes us very close to the heart of apartheid and its real point. In fact I feel it could be argued that the opening sequence of almost every episode replays Number 6's forced removal, echoing that of the people forcibly removed from areas rezoned for whites, under South African apartheid. I'm afraid this is going to be a post where I largely marshall evidence brought from elsewhere, and that is largely because I can't summarise the forced removals better than they are here:

'From 1960 to 1983, the apartheid government forcibly moved 3.5 million black South Africans in one of the largest mass removals of people in modern history. There were several political and economic reasons for these removals. First, during the 1950s and 1960s, large-scale removals of Africans, Indians, and Coloureds were carried out to implement the Group Areas Act, which mandated residential segregation throughout the country. More than 860,000 people were forced to move in order to divide and control racially-separate communities at a time of growing organized resistance to apartheid in urban areas; the removals also worked to the economic detriment of Indian shop owners. Sophiatown in Johannesburg (1955-63) and District Six in Cape Town (beginning in 1968) were among the vibrant multi-racial communities that were destroyed by government bulldozers when these areas were declared "white." Blacks were forcibly removed to distant segregated townships, sometimes 30 kilometers (19 miles) from places of employment in the central cities. In Cape Town, many informal settlements were destroyed. In one incident over four days in 1985, Africans resisted being moved from Crossroads to the new government-run Khayelitsha township farter away; 18 people were killed and 230 were injured.
'Second, African farm laborers made up the largest number of forcibly removed people, mainly pushed out of their jobs by mechanization of agriculture. While this process has happened in many other countries, in South Africa these rural residents were not permitted to move to towns to find new jobs. Instead, they were segregated into desperately poor and overcrowded rural areas where there usually were no job prospects.
'Third, removals were an essential tool of the apartheid government's Bantustan (or homeland) policy aimed at stripping all Africans of any political rights as well as their citizenship in South Africa. Hundreds of thousands of Africans were moved to resettlement camps in the bantustans with no services or jobs. The massive removals in the early 1960s to overcrowded, infertile places in the Eastern Cape such as Dimbaza, Ilinge, and Sada were condemned internationally. These were dumping grounds for Africans who were "superfluous to the labor market," as a 1967 government circular called them. Ultimately, these people were to become the responsibility of "independent" Bantustans so that the white regime would have no financial responsibility for the welfare of people there. Hundreds of thousands of other Africans were dispossessed of land and homes where they had lived for generations in what the government called "Black spots" in areas that the government had designated as part of "white" South Africa. Also, some entire townships were destroyed and their residents removed to just inside the borders of bantustans where they now faced long commutes to their jobs. By the 1980s, popular resistance to removals was widespread, and government plans to remove up to two million more people were never carried out.' (Source)
If it seems as if I'm making too much of the removal issue, when I'm supposedly writing a post concerning returns, that is actually because I'm doing it deliberately before turning it on its headby commenting that actually the point of this episode is to turn therecurring removal theme of the rest of the show into a return. Of course the point of the return is that Number 6 cannot return to what he has known because his home and car have been usurped by the Village authorities. He has been truly disappeared in a passive way, just as many people were in South Africa. This impossibility of return and its parallels with apartheid forced removals are reinforced in this account relating to forced removals in Sophiatown, Johannesburg (the removals in District Six of Cape Town were more contemporary with the making of the show and may therefore have been more influential but this quote happens to say exactly what I want to say:
'Nobody argued that Sophiatown wasn't a slum, at least in part. The journalist Anthony Sampson, who knew both the neighborhood and its people quite well, once wrote that it "was filthy, overcrowded and it stank...." It was also, he quickly added, "the heartland of developing urban black culture -- it vibrated with activity, talk and excitement." And, so, everybody -- everybody, that is, who was black or politically progressive -- would have agreed with Father Huddleston that "...the Government's scheme was not slum-clearance but robbery: robbery carried out in the interests of and under pressure from the neighboring white suburbs: a political manoeuvre."'(Source)
The apartheid authorities were not really relocating people to a suitable place under their racial policy, they were really taking what people had for themselves. The illustrations to this post are before and after pictures of Sohpiatown – it was made impossible to return. Subsequently the area was renamed Triomf and housing built for working-class Afrikaners, although it has now been renamed Sophiatown again.
The message that the apartheid authorities were giving to the displaced non-whites is almost exactly what the Village authorities are saying to Number 6: We will do what we like, ensure you have no recourse to law, we will take what is yours, including name and identity, and you can never return. In the case of this episode, Number 6's solitude is additionally reinforced by the empty Village and lack of speech in the first part. The message is chilling in the extreme, and one calculated to induce despair.
Image credit: here
60s TV Apartheid in The Prisoner The Prisoner