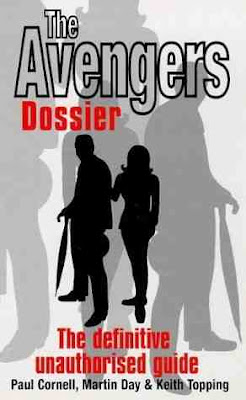 I bought a new (to me) book about The Avengers this week. It is The Avengers Dossier by Paul Cornell, Martin Day, and Keith Topping (Virgin Books, London, 1998. ISBN 0863697542). Given the date, I assume it was one of the flurry of publications about the show timed to coincide with the film, and I'm horrified to notice that that is well on the way to being twenty years ago. I'm surprised that I haven't ever seen this book before, since I bought several books about The Avengers at the time, and I was one of the people who loved the film, saw it multiple times, and got caught up in the fandom.
I could never understand the critical hammering the film got, and reading round on the internet I can't understand the critical hammering this book gets either:
'Rarely have I come across a book with so many errors. While the authors have done a decent amount of research and present some intriguing details of the show's history, their work comes up alarmingly short in the accuracy department. Factual gaffes aside, just the sheer number of typographical errors is staggering. And these are just the ones that have been noticed so far—it is quite likely there are many more!' (source)
I have commented multiple times that one of the things which started me blogging about cult TV was the relative lack of critical sources out there. There are endless resources for The Prisoner and Dr Who, but the resources for the rest of the shows I like tend to be strong in the descriptive front and weak in analysis. I have thrown out so many books about The Avengers over the years, because I don't need another description of the plot of an episode. If I want to know that, I'll watch it. I'm not going to name any of these books individually, but suffice to say that they tend to be very glossy tomes with lots of pictures. They are clearly coffee table books.
There are also some more academic studies of The Avengers out there, usually in tomes on sixties culture or television, and some of these can make dense reading. It is a relief, then, to find that this book steers a middle course between theory of media and plain description. It analyses every episode of The Avengers (even the ones apparently no longer surviving), with a short summary of the plot of each episode and then comments under a number of idiosyncratic headings. I am amazed that I have no recollection of ever seeing this book because they almost exactly mirror my own approach to the show, including comments on the amount of champagne drunk in various episodes, the relative kinkiness, fight scenes, and most interestingly, suggestions as to the 1960s concerns touched on in each episode. The book is almost like talking about an episode with another cult TV fan, who keeps making intelligent comments about the episode in question. This is a book which I know I will find myself referring to when thinking about a particular episode with a view to blogging about it.
I will happily admit, given the number of negative or mixed reviews on the internet, that this book obviously has errors of fact. In fact if you want to see a list of them, you can click on the page referenced above. That said, I think it would be fair to describe this as sloppy research and editing rather than the worst book in world history, which to me seems somewhat excessive.
60s TV The Avengers