Apartheid in The Prisoner: A B and C 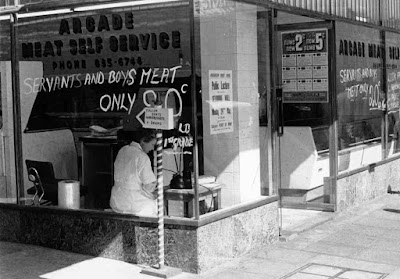 I was very tempted to omit this episode all together, in my examination of possible echoes of South African apartheid in The Prisoner. This was not for the obvious reason – that it was difficult or impossible to find such echoes in this episode – at all, in fact it seems that it is possible to see almost anything referred to in The Prisoner is you try hard enough. The obvious springboard into this episode for me was the ‘scientific’ nature of the tests used on Number 6, clearly an immediate reflection of the 1960s’ ambivalence towards science I have noted so often on this blog. ‘Science,’ in this world-view is both set up as the authority which has all knowledge and opens the door to future technology, and also as a source of danger if it gets into the hand of the wrong people.
The obvious reference to apartheid here is the pseudo-science which was used to underpin the ideology of neighbourly separateness, with most advantage being given to whites. It is probably important to note at this point that while science was misused in this way, theology was as well, and the Calvinistic Dutch Reformed Church was not slow to believe that the land had been given to the Afrikaner settlers by God. This is of course a far more dangerous idea than any pseudo-scientific posturing, because it can never be proved or disproved, and as such attracts fanaticism. My difficulty with this post was in finding examples of the pseudo-science used to underpin apartheid. What I found instead was the ravings of those who continue to maintain that apartheid was a good thing and should be reinstated (if you really want to read this kind of misuse of history, theology, science and philosophy, a good starting point can be found in the series of web posts called Opening Pandora’s Apartheid Box). Since I didn’t want this post to become a collection of hysterical right-wing ravings or a rebuttal of these views (I can rebut them, but really ought to make some effort to keep to the brief I have given myself for this post), I have found it very difficult to write anything here.
Suffice to say that the only way in which it seems to me this episode has echoes of South African apartheid is in the misuse of science, here to get into the mind of Number 6 and there to assert the superiority of whites to everyone else. One single example of this sort of apparently authoritative apartheid-era propaganda will suffice here to suggest the kind of authority and reliability imputed to scientists, which can go so wrong:


‘I must warn you against the irresponsibility of accepting parenthood where everything points to the fact that you are endowed with genetically transferrable characteristics and cultural attributes of intelligence, perseverance and leadership which can take your people to great heights. You also have an outward task: and that is to combat genetic dangers. I refer to the dangers of inter-mixing with genetically-bound heredity and characteristics which differ so much from those of your nation that there is the danger of bringing degeneration upon your people. I refer more specifically to inter-mixing with the Bantu. In this respect I do not want to be misunderstood. The Bantu have wonderful characteristics, but their genetic composition and cultural evolution is so different from that of the Coloured people that a mixing of the two cannot in this respect be advantageous for the Coloured man or woman.’ (Prof F D du T van Zyl, Dean of Medicine at the University of Stellenbosch, at the graduation ceremony of the University College of the Western Cape. Cape Times, May 20, 1968, cited in Ben MacLennan: Apartheid The Lighter Side. Chameleon Press, Plumstead, 1990, pp. 13-14.)