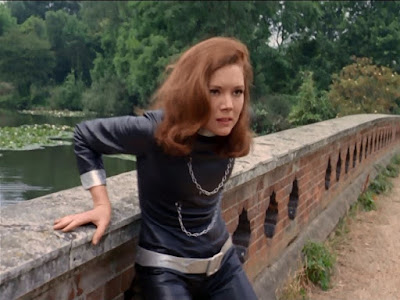 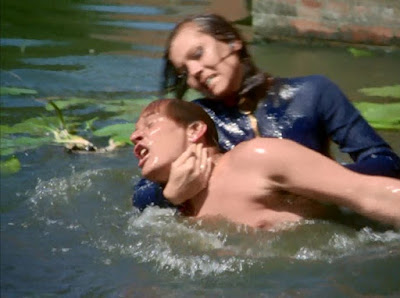 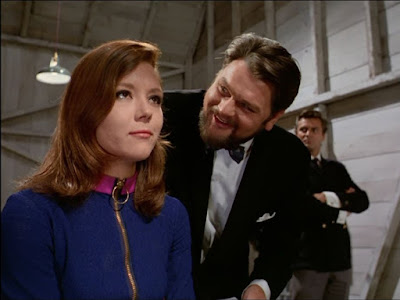 This wasn't going to be a post on an Avengers episode at all. It started off life as a post on the Champions Episode, The Iron Man, but since I only have to say that while it is an endearing plot, it is strange how often George Murcell is wheeled out as a random foreign baddie. I was astonished to discover the sheer breadth of his acting career, including frequent appearances on ITV series. This post therefore morphed at that point into an attempt to write a post or series of posts on George Murcell as a character baddie. I was horrified to discover that someone has done it far better than I could ( here), and in fact short of merely copying and pasting that essay, I would refer you there. So I was left thinking about the shows in which I have seen him, and immediately wanted to write about this Avengers episode.

In true Avengers style Murcell plays an evil mastermind with the rather unlikely name of Nathaniel Needle, who hides out in a haystack. The show is peppered with rich bankers, other villains, solid types whom we can trust, many a murder in reality or in token. In the visual language of The Avengers there is an undercurrent of fear of the modern world. The show's characters either live in ultra-modern apartments, indicative of wealth and a lack of background, with the attendant suspiciousness that must come with new money, or else in old country houses. It is clear that some dodgy dealings are going on right from the start, the world is a frightening place, the security of the world has become compromised. The entire point of the sets in this show is to set up a mere illusion of security, which is at threat. Interestingly, Mr Needle first appears in evening dress, so that he is seen to be one of us, and places this as an episode where the rot is within the establishment.
That said, plot-wise this isn't really an outstanding episode for me personally. The Avengers are presented with a threat to national security, personified by Our Sort of People, track the culprit down, who is dealt a death blow by Fate, and we all go home for tea. That said, the rather wooden plot is more than made up for the cast of eccentrics who make up for it. The real fear on the characters' faces as they are 'murdered' is genuinely suspenseful. The repeated 'murders' also play with the conventions of television. We are used to seeing people being murdered on television, but this show reverses what we expect by not completing the action.
Visually, this Avengers is superb. The sets are very effective. The cars are either ridiculously aged or bang up to date for time (incidentally I fell in love with a Reliant Scimitar that a family friend owned, when I was a child: there is a white one in this show. The scenes at 'that' bridge are superb.
Which brings me nicely to one of the most remarkable features of this episode. My post on Castle De'Ath, in which I point out all the possible kinky things in it, is one of the posts on this blog which get the most hits. Never one to avoid difficult subjects, it would be remiss of me not to comment that this is another episode with incredibly kinky undertones. Famously it is the one occasion when Mrs Peel wears leather – and famously the last because it got trashed in the fight scenes. The fight scenes… Many a man in the 1960s would have no doubt given their back teeth to be involved in those fight scenes with Mrs Peel. Of course she wins. That's the point. That's the dynamic – the man takes her on and loses, and that is the kinkiness. This dynamic is then reversed for a bit when the baddies take Mrs Peel prisoner. There is something strangely sexy about the way she forces Needle's henchman to take her to his leader. This changing of the power balance, while we know in reality that it's going to be OK (retaining control in reality, that is) is surely the most sexual aspect of The Avengers. Incidentally, I've put a wider selection of photos from this episode, on my Flickr, starting here.
All this fear, power struggle, and fighting, is amply leavened by a touch of Avengers unreality. If it was merely that a crazed megalomaniac arose in the English countryside, this show could be fearful. Place it in a village, script it by Agatha Christie, and it would be terrifying. However it is clear that this is still a world that never existed. Channel B has never existed on British TV. Everyone just knows where Bridge Farm is. A group of rich men all just happen to invite Steed to a party. It's unreal. And a million pounds in cash? This episode is made into cosy viewing by the mere fact that it could never have happened. The effect is surely to make the viewer feel secure while showing fear and trembling. It is of course also going to be most popular with those who want to see Mrs Peel wet or in leather, or fighting (incidentally nobody seems to have noticed the whacking continuity disaster that straight after coming out of the water, she and her opponent are both dry and well-kempt immediately). All in all, this is definitely stonking good television.
60s jobbing actors 60s TV The Avengers