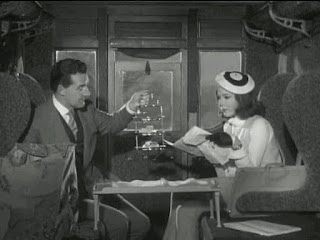 This post will be in a different format from my usual ones, which are usually focussed on a particular show, period, or theme. I've been away from this blog for a while, but I'm now settled in a new home. It isn't exactly where I wanted to be, but close enough, and was absurdly cheap. So far the only things that don't work are the lights in the oven and cooker hood, so I've come off extremely lightly. The only thing I haven't tried is the Jacuzzi bath – to me this flat is a palace and always will be.
Of course I haven't stopped watching television; my recent viewing has followed two trends, one of which is well away from the 'mostly British, mainly 1960s' theme of my viewing. The other trend is that I find I return to The Avengers in times of stress: there really is no substitute for joining Steed and Mrs Peel in imagination, drinking tea from bone china in a railway carriage, or drinking champagne in the back of a taxi. I have also diversified somewhat to watch some new-to-me series.
Grantchester has been something of a disappointment to me. Despite my liking for unreality in television, I only appreciate unreality in shows which don't claim to be realistic. The pretty-boy vicar's jazz obsession and burgeoning bromance with the policeman is just too anachronistic for the 1950s. Do period drama or do modern, but the 1950s is just too far away gracefully to receive the projections of modern living.
Grantchester was of course associated with Rupert Brooke and his circle, and may well be intended to create an assonance with the classical world of Barchester portrayed in Trollope's books. I have been watching the BBC dramatisation of these stories with great appreciation. The period approach is faultless, and the pace perfect for books written in a more leisurely age.
I have finally bought a boxed set of Budgie, starring Adam Faith, which I have been wanting to watch for some time. It is famed as the predecessor of Minder, having a strikingly similar premise and plots. I have read criticisms of it that it creaks like an old gate, and I'd have to admit that I can only agree with that verdict. Admittedly, this is after only one viewing, in which I kept finding my attention straying, so that I can't actually remember that much of the plots.
Monty Python is a show which I feel is probably very badly served by many of its DVD releases. Everyone knows certain famous sketches from it, and I feel there is a problem with the fact that many of its releases are focussed on selections from the series. Of course as another show originating pre-video, we could only reproduce how original audiences viewed it by watching it one episode a week at the same time. Even watching episodes back-to-back, though, I'm finding I appreciate it better as a whole series of episodes: comedy in many ways works better with peaks and troughs, and only having peaks over-stimulates.
French and Saunders are a comedy duo I remember very fondly from their original broadcasts in the 1980s (I was never quite so keen on Victoria Wood, and of course there is a symbiosis between French and Saunders and the characters in The Young Ones). Once again, I have been re-watching their shows on a 'Very Best of' DVD, and am now itching to get the whole thing. At the time I thought it was terribly grown-up and sophisticated that the band in the show was called Raw Sex: seeing it again nearly thirty years later, of course I understand the point that Raw Sex are not sophisticated or sexy!
Some seventies shows which I missed while writing about seventies show have also come my way. To The Manor Born is a perennial favourite of mine. I think I probably watched it contemporaneously with Hinge and Bracket in Dear Ladies, and developed a taste for somewhat bitchy posh ladies with sharp tongues!
A seventies show I'd never come across until I found the DVD in the entertainment exchange is Bouquet of Barbed Wire. I started watching it while I was unpacking my boxes in the new flat and am struck by how it completely avoids most of the common themes of 1970s TV, instead focussing on a father's obsession for his daughter.
Get Some In! is a 1970s show set in the RAF in the 1950s. It is very much a classic sit com based on the lads doing national service. Their corporal is played by Tony Selby, familiar from many more underdog roles in 1960s TV. It is in many ways superior to It AInt Half Hot Mum,, more subtle, less crude. I notice that the Amazon reviews focus on old men's reminiscences about their own national service, which may explain why the show is less well-known.
As I'm writing this I am watching Bewitched, a real reminiscence of a show I used to love in my childhood. I've also bought a DVD of Alfred Hitchcock Presents, which I haven't watched yet but used to love. His suspense worked better for me in a short time slot: the films build the suspense too slowly so that I tend to fall asleep!
I will no doubt be writing further about these and other shows in the near future, now that my head is in the same place as my body for long enough to get on the keyboard and write some blog posts!