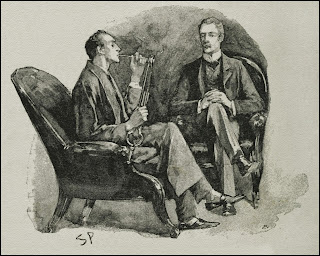 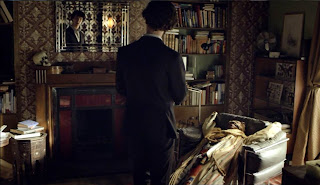 I recently fell for an offer in a charity shop where you could buy X number of DVDs for Y amount of money. My third choice was the first season of Sherlock. I was frankly thinking that I may be able to sell it on for more than I had spent on it, since I had already tried to watch it once & could only consider myself unimpressed. She I took against on my first viewing was actually the whole adaptation of the Sherlock thing to a modern milieu. I thought it over-written & a little too clever for it's own good.
Nonetheless I thought I'd give it another go & was pleased to find I took to it much better this time, so much so that I've gone out & bought the second series as well. However perhaps I'd better say that I suspect this post will sound more negative than I feel.
Certainly it is very clear from the start of A Study in Pink & from the commentary on the disc that there were two starting points to the creation of this series, one of which I disagree with. That is the notion that Basil Rathbone is still the definitive screen Sherlock Holmes. For me Rathbone is a little too cold as Holmes, a little too down on Watson. I find Jeremy Brett remarkably unmoving as Holmes: I have friends whose preference is either for Rathbone or Brett & of the two I can see the Rathbone preference. I find I lose interest in the middle of the Brett ones, they seem to lack both momentum & atmosphere. I have been unimpressed by the two recent films - Holmes should not be turned into a CGI extravaganza. My personal preference would be for Peter Cushing as Holmes: I like his intelligent, relatively unemotional portrayal convincing & probably as close to the depiction in the books as it could be. The point of this is that I disagree with the assertion that Rathbone has not been trumped as Holmes on the large or small screen. I would argue further that Rathbone is the wrong place to start to source our internal image of Sherlock Holmes: I believe the true source for that is to be found in Paget's illustrations to the stories in The Strand. These illustrations have echoes in the look of this show, particularly in the design of the flat in Baker Street - an admission of the true origins of the Holmes 'look'.
The second starting point is at the heart of this adaptation of the Holmes stories, namely that if Watson were writing about Holmes today his writing would take the form of a blog. This demonstrates what this show excels at - making the viewer think about how Holmes would translate in modern terms. The fact that I would personally disagree with some of these ideas merely reinforces the truly Holmesian effect of making me think about it. I think choosing a blog as Watson's medium is a mistake. Ironically, given that I'm blogging about this, I think a blog was an unfortunate choice, as of course social media dates very quickly & that single choice will make this show seem very dated as blogging becomes even more outmoded than it already is.
Of course that is always the danger of 'updating' something. On the other hand I had never realised before that Watson would probably have what we would now call Post Traumatic Stress Disorder, depressingly easy to translate into twenty-first century terms. Of course he would nowadays be in therapy, reflecting badly on his condition's likely reception in the nineteenth century. So I'm both impressed by the adaptation's thought-provoking ability & ambivalent about some aspects of it.
Something unchanged in Holmes's world is interestingly the way he moves around the city & relates to the various groups of police, ethnic groups, the homeless, etc. I like this lots, it's strangely reassuring. Another thing which is the same is the way Holmes manages to be intensely irritating. Conan Doyle likes to portray his deductions as greeted with wonder by everyone surrounding him, which I find incredibly unlikely. I think the way he tends to irritate people in this show would be much more true to life.
There is however a major problem with understanding Holmes nowadays - it is almost impossible for us to understand a pre-sexual revolution & pre-Freud understanding of sexuality. I particularly don't like the repeated device of having another character mistake Holmes & Watson for a couple. Once, perhaps, would have been adequately making the point. Hints of a bromance would also have worked better but it is jarring for anything gay to be suggested. It is possible to read hints of a subconscious sado-masochistic dynamic (not implying relationship) into Holmes & Watson in the original stories, but I feel they would translate best into modern terms as two men sharing a flat, both heterosexual. The repeated gay suggestion also falls flat on it's face because the parts are played very straight. The only character who comes across with a gay presence is Moriarty, who is supposed to be gay & is played by an actor who is gay in real life.
While I cannot fault his portrayal of Holmes I have another problem here. I have commented before here about my dislike of big name actors: there would be something wrong in coming out of A fictional work with too great an awareness that you've been watching, say, Gielgud. The whole point of A really good actor's trade is that you forget about the actor himself. I notice a tendency for people to say 'Did you see that programme with Benedict Cumberbatch?' I'm only remarking on a phenomenon rather than making a judgement, the tendency seems to be there.
All in all, Sherlock is thought-provoking, which I feel may be it's enduring contribution to the canon. It has some shortcomings of perception & depiction, which I feel may make it date quickly & prevent it entering my Stonking Good Television category.
Sherlock Holmes