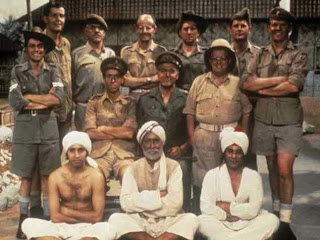 I've just been watching the first series of It Ain't Half Hot Mum, and have come to quite a different impression from the one I posted about in my last post here, where I got side-tracked into racism & body issues. That was also largely based on memories of the show when it was first broadcast, when I was a child, and on viewings some discs I bought of series 3 and 4.
It is usual to comment on the show's now-unacceptable (and unacceptable at the time to those portrayed) attitude towards various ethnic groups, imperialism, and so on. I think this can distract from the show as a show. Firstly I certainly would guess that eight series of this show were way too many: unfortunately I've sold the discs of series 3 and 4 so could only compare by watching them on – ahem – a certain internet website which often has whole episodes of TV shows on. However, the characterisation and the show's standing as a situation comedy strike me as much better in the first series. The characters leap out fully-developed right from the start of the first episode, and I would have to respect this as quality writing. I stand by my later memories of Perry and Croft's TV shows as being dreary – perhaps the same principle of going on too long (and bizarrely with virtually the same cast in programme after programme) applies.
One thing has struck me in particular as interesting – the acceptance that 'Gloria' is homosexual. He makes comments accepting that he is, he doesn't seem to deny it (leaving the question of insult aside) when referred to as a poof or a nancy boy. The show interestingly raises a further level of sexual ambivalence by the excitement Captain Ashwood shows at the idea of the men dressing up as women. Just like the real thing. Hmmm…
Nor is the actual situation in India at the end of the second world war completely ignored, although obviously it is only used as the background to the sitcom. The situation, if you like, is that the inhabitants of the country want the British out. This provides an interestingly unstable background to the antics of the concert party. I feel that in addition to the colonialist response to this so often demonstrated in this show, it may also faithfully reflect an attitude reported during the Second World War – when your life is continually in danger everything changes proportion and sometimes important things are treated in a shrug it off way. There was nothing that could be done about the situation so people just 'carried on', in the words of the irritating posters so fashionable a few years ago. It's cringe-making now, but a sing-song or a concert party probably was seen as a valid way to boost morale or at least provide escape in a dangerous situation.
Don't get me wrong – this show remains demeaning to virtually every group of people it mentions. It couldn't really be broadcast in any prominent position today. The jokes in the show are just that, you may say, and don't mean any harm. But the point is that ultimately they do. Words are things, it is not true they never hurt, and perceiving the freedom to insult whole groups of people in the name of entertainment creates an environment where it becomes acceptable. But the reason I'm posting again is that I've come to the conclusion it didn't start as bad as it went on, and also the higher quality of the first series suggests some better writing than I would have noticed in my previous viewing. It's still Probably Not Cult, though.
70s TV It Ain't Half Hot Mum Topless on TV