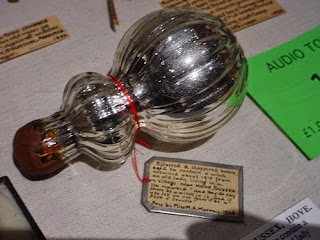 Children's TV of the 1970s again, and once again a series that I was probably too young to see at the time of its original broadcast. And I have no doubt that my mother would have discouraged me strongly from watching it, on the pretext that I would find it frightening (as I child you don't understand how these pretexts work for adults). In fact I think I would have loved it, given that I've discovered it's based on a true story:
'The 1978 children's paranormal TV drama The Clifton House Mystery was a ghost story based on the circumstances of Brereton's death. The plot revolved around a family moving into an old house in Bristol that finds a long-dead skeleton in a hidden room. After some unexplained incidents, they become convinced that a ghost connected in some way with the Bristol Riots of 1831 is haunting the house. After checking local records, they realize that it is the ghost of a dragoon commander who was court-martialled for his handling of the riots, and who later disappeared without a trace. The ghost is named "George Bretherton" in the TV series. One of his descendants, named "Mrs Betterton", had sold the house to the family, but was allegedly unaware of the hidden room and its contents, referring only to a vague family scandal that happened generations ago.' (http://en.m.wikipedia.org/wiki/Thomas_Brereton)
In fact I think back to the seventies as a halcyon time of interest in all things…I suppose the word 'paranormal' would cover it, or possibly 'supernatural'. Certainly The Clifton House Mystery has an aura of incredible familiarity, and certainly not because I have seen it before, but because it manages to include many of the great elements of a classic ghost story – a basis on real history, objects with a link to dead people, a hidden room, blood dripping from the ceiling, human remains. In fact these were many of the staples of my childhood reading, when I could get to choose it myself. One of my favourite books was The Ghost of Thomas Kempe by Penelope Lively, which once again draws on the classic folklore of the ghost story. In fact the Pitt Rivers Museum in Oxford actually has a witch in a bottle among the exhibits. When I got to about the age of thirteen my mother finally gave in to my badgering to consent to me having an 'adult' ticket at the library, so worried was she that I might find out some mystery or frighten myself somehow. In fact the first thing I took home was The Most Haunted House in England by Harry Price. Those familiar with the Borley Rectory story will be aware that opinion tends to be sharply divided between fanatical belief and fanatical denial. My own opinion is that the story is too good to be true: there is hardly an element of traditional ghost stories missing, and while I can't claim to know anything about psychical research I can see that Price's efforts were sloppy at best, and the need to remove an alcoholic, nymphomanic, terminally-bored, vicar's wife from the scene before investigating should be obvious to all.
Anyway, this over-egging of the cake doesn't afflict The Clifton House Mystery: its story is just right. Instead it is spoiled by other things. Visually the set gives exactly the right impression of darkness and neglect, and the repeated music box music is perfectly hypnotic. Peter Sallis makes an interesting ghost hunter, but unfortunately he is spoiled for me by over-identification with a certain later role. But the one huge hole in the plot of this one is that after a human skeleton is found in the hidden room, the parents just leave it there and don't do anything about it. What? Incredible. It's perfectly simple to include the authorities as bumbling simpletons or disbelievers. Rather this unreal action pushes the story over into fiction so far that it erodes the real impression so necessary to a ghost story. Rather, this is a gilded youth story rather than a ghost story. The children go off to a lecture on ghosts without their parents knowing where they were, they actually knock a hole in a wall without being told off. This unreality is what makes this story as essentially out of synch with our own world, although you may also think that that is the point of this genre:
'You don't have to be nine to find this stuff funny. When I re-read the book for this article, aged 36, I laughed just as much as ever. There is also great comfort in these descriptions of boyhood – even if they also come with their own difficult truths. This may be a book targeted at children, but it's still Penelope Lively. She never talks down to her younger readers, never assumes that they are less than intelligent. The result is a book more profound than most written for grown-ups. And also sadder.
'Even in the opening pages, we hear that the village of Ledsham has "the air of being dwarfed by the present". A new, uglier reality is encroaching on the cosy past: "New housing estates were mushrooming now on two sides of it, but the centre remained as it must always have been with the houses and streets a size smaller than the houses and streets of a modern town. Lorries, and even the tops of cars, rode parallel with the upstairs windows of the terraced cottages."
'It soon becomes apparent that everything in the book is at odds with time – as James becomes all too aware.' (http://www.theguardian.com/books/booksblog/2013/dec/12/comfort-reading-penelope-lively-ghost-thomas-kempe)