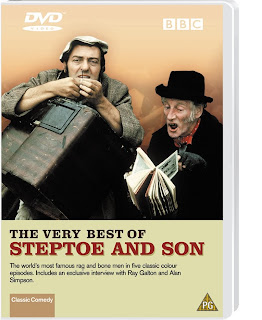 I'm gratified that this series of posts on 1970s TV is generating interest in the blogosphere, since this kind of TV is slightly out of my own choice of shows, which can be described as '1960s weird'. I am having IT problems (aren't I always?) So for the foreseeable future I expect to have problems with tidying up posts on here & replying to comments, but thank you to the people who have commented recently.
I didn't actually realise this one had carried on into the 1970s, but I'm watching episodes on the DVD which illustrates this post, all of which were broadcast in the 1970s. Having said that these 1970s shows are slightly off my radar, Steptoe & Son thrives on one of the staple elements of 1960s TV, something which was very much in the zeitgeist of the time - the confrontation between tradition (embodied by the Steptoes), & modernity (represented by the world outside). Harold's periodic talk of revolution & predictions of the end of their way of life place the Steptoes in the side of this confrontation which is left behind. The 1960s thing was very much the pressure to modernise or get left behind. The contrast is very plain at the beginning of Back in Fashion, where Harold is collected from an up-to-date tower block, contrasted with the horse & cart outside. Of course the irony is that it was after this that those kind of blocks came to be seen as failures. In retrospect the argument was about the wrong thing - it focussed on a particular time, since swept away in a wave of postmodernism.
For several reasons I came to blog about Steptoe & Son with fear & trembling. The first reason is a completely personal one - the father-son relationship is way too near the bone for me, since it resembles my own relationship with my mother. What Steptoe & Son does, very cleverly, is manage to make a subject which I know full well to be very far from funny, entertaining. This is a show which can make me laugh out, despite the proximity of the subject matter for me. In fact this relationship was reflected in Brambell & Corbett's real lives:
'From 1962 to 1974, Steptoe drew audiences of 20 million and more. Brambell, who was the wily, dirty-minded, jealous old rag-and-bone man, and Corbett, who played the unmarried, hapless son trapped by his own forlorn dreams, were among the best-known stars on TV.
'When the series ended, both actors found that they, like their characters, were trapped together, with the public unwilling to accept them in other roles. When Corbett died from heart disease in 1982, aged just 57, a second Steptoe stage tour of Australia was being planned. That will come as news to the show's fans: most believed the pairing was shattered by Brambell's outrageous behaviour on their previous tour. A 2002 documentary, When Steptoe Met Son, claimed that Corbett was so disgusted by his partner's drunken antics that he vowed never to share a taxi with him again, let alone an international tour.
'But Susannah, who joined them in Australia as a child of nine in 1977, saw the crisis unfold at first hand. She believes it was her mother, Maureen Corbett, who kept the show on the road: "Willie was very prickly, and my mother was good at dealing with that. He liked her very much and came to rely on her."' (http://www.theguardian.com/tv-and-radio/2012/mar/18/steptoe-and-son-stars-tensions-biography)
Of course the other reason I approached this show in fear & trembling, was what I would find out about the well-loved characters of my youth, & sure enough, Wilfrid Brambell has also been accused of abuse:
'Wilfrid Brambell, the actor, became the latest BBC celebrity accused of child sex abuse last night after it emerged that two people had come forward in Jersey claiming to be his victims.
'Brambell, who played the "dirty old man" Albert Steptoe in the comedy Steptoe and Son, allegedly abused two boys in a theatre in Jersey at the height of his fame in the 1970s.
'One of the alleged victims was a resident at the notorious Haut de la Garenne children's home which was at the centre of a high-profile police investigation into historical child abuse on the island in 2008.
'He claimed to have been taken to the island's main theatre, the Opera House, as a "treat" before being taken backstage to meet Brambell, who he accuses of molesting him in a back room.
'The second victim, who had not been a Haut de la Garenne resident, also claimed to have been abused by Brambell at the theatre. The alleged victims were aged 12-13 at the time.
'Brambell, who died in 1985, was homosexual and had a criminal record for "persistently importuning for an immoral purpose" in a public lavatory dating from 1962.' (http://www.telegraph.co.uk/news/uknews/crime/jimmy-savile/9616121/Jimmy-Savile-Steptoe-and-Son-actor-Wilfrid-Brambell-abused-boys-in-Jersey-claims-whistleblower.html)
I'm noticing something else about many of these shows, exemplified by Steptoe & Son, & I'm using it as the example because it broadcast contemporaneously with the later series of The Avengers. Compared to the vibrant colours of those series & some others of the 1960s shows I like, Steptoe & Son draws on a more muted palette. Greys & browns predominate, making it look much less interesting visually. I'm not why this would be, except deliberately to make the point of the bleakness of their lives. The other shows aiming for gritty realism that come to mind - Public Eye & Z Cars - use a similar dull palette of colours. This contrast (with the unreal world of The Avengers or Randall & Hopkirk), if deliberate, is as subtle as a sledgehammer.
Steptoe manages to be one of the few shows which can make me laugh out loud, while also tearing at my few remaining heartstrings with its depiction of a troubled father-son relationship, as well as prompting reminiscences of the time. I suppose the fact I'm saying these things would indicate it is quality television. Just a pity I now know the 'back story' of what it did to the actors, & the allegations about Brambell.
------------------
70s TV Steptoe and Son