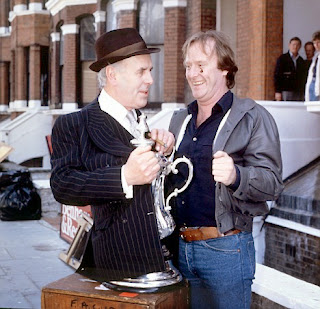 Another series that I remember from the eighties but started in the seventies. It's also another series that I'm finding much better on watching it now, than I remember it being at the time. Another series featuring some seriously dodgy motors (see, I'm already starting to talk like Arfur). Another series aiming at realism & grittiness. Another series (more are to come in this series) set in the hand-to-mouth world of the criminal underground. So much so seventies TV show, but there are several fings which interest me here.
I wonder what the original target audience for Minder was? - what prompts me to wonder this is that it strikes me as very much the working class used as entertainment. Minder very much shows the other side of the 1970s era of prosperity, both in its depiction of hand-to-mouth dodgy dealings, but in a frequent depiction of rich people as even more dodgy than the poor people. There is often a very real element of a morality tale in Minder, & the moral is that it is better to be poor & straight, than rich & crooked. In fact the rich are often shown as users of other people, & in the 'script' are also shown being brought down by the cunning, working class, wheelers & dealers. It is therefore not that likely that the intended audience was nouveau-riche or even middle class: it's much more of a working-class commentary on others' prosperity. The irony of course that Minder is set against the dying days of the traditional white working-class. The reason Terry & Arfur are so accepting of casual work rather than permanent employment is that that is exactly how working class employment would traditionally work: the classic example would be workers going to the docks in Liverpool for work in the morning. To this day a lot of manual workers find their work like that, only through agencies now. The exception to this would be the locality-specific industries such as mines or factories, where the workers were more assured of life-long employment, but ironically Minder is set against the background of these industries either slimming down or closing completely.
Another way the world has changed immeasurably in the 35 years since the first series of Minder is that the working-class accents showcased in the show have since become fashionable. Surely there can't have been that many mockneys in the 1970s? And the upper classes didn't pay for expensive educations with the unfortunate side effect they have now of endowing their offspring with an imitation Beffnal Green accent.
Something I find particularly interesting is the appearance of black characters in the very first episode, set in a laundrette (I knew I'd bring laundrettes in again somehow). Terry talks to them without any apparent barrier, & they are characterised sympathetically. Certainly I would expect at this time that people who otherwise mixed in a completely-white world would not have been able to mix with blacks so easily, so it is an interesting depiction.
Otherwise I love the depiction of 1970s London - & not the sort of fashionable London that would be envisaged with hindsight nowadays, but the world of ordinary people. I am formulating a theory about 1970s TV, that it was run by people who remembered the Second World War, but was far enough removed in time for the war's influence to have dimmed somewhat. My theory would go that this was a generation with a getting-by mentality formed by a war, living in a country still shaped physically & psychologically by a war. These effects had long roots, & my theory is that around this time is where the hinge into a new mentality happens - this change would have been completed by the early nineties, so that the people running the show would have been thrusting young executives willing to risk shows such as Allo Allo. In my theory Minder is interesting because it is set at a sea-change in British history, in all sorts of ways.
------------------
70s TV Minder