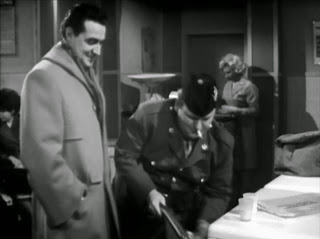 I have commented before that I don't have a favourite Avengers girl, nor a favourite series of the show. My interest in all things comes in fads & I'll concentrate on series 6 for a bit, for example. At the moment my interest is being caught by series 2 & 3.
This post is not the one I wanted to write, which was a themed post on the subject of launderettes. This was sparked by the simple fact that the flat I'm renting doesn't have room for a washing machine. I've never objected to launderettes myself - the only previous time of my life I used to go to one regularly was when I lived in Leeds. That one was on the edge of a large council estate, where there was obviously a tradition of going to do your washing, & whole families would go. I was therefore surprised to walk into the one down the road to find it full of men, all of whom were obviously on their own & hopeless at anything domestic. I'm afraid I just dumped the lot for a service wash, since I don't have a batman to do it for me. This still isn't as posh as getting the laundry down the road to collect it & deliver it.
Nonetheless this has made me think of classic TV episodes with scenes set in launderettes. What prevented this becoming a themed post was that I simply cannot remember in which episode of Danger Man Drake is handed a lighter in a launderette. Pity.
There are several things which make this Avengers for me - I love all of the more domestic scenes between Steed & Mrs Gale. I love it that she is telling him off for washing leather when we first see her in this one. It seems to me that there is a very real sense in which Steed retained his original sidekick role up until the Tara King series - in ability, knowledge, intelligence, he will always really be second fiddle to Mrs Gale. Is there nothing this woman can't do? - understanding washing & able to do unarmed combat as well!
Of course this Avengers is very clearly out of the great & the good gone bad stable. In terms of insanity the plot to make Mrs Gale Queen rivals anything in later series.
I notice the opinions on the internet about this one are somewhat conflicting - it seems that most viewers feel a certain dissatisfaction with this episode, but disagree about the source of the dissatisfaction. For me I find the slow steady development & sudden ending rather unsatisfying. However that is more than outweighed by the wonderful details. The contents of the officers' mess kitchen, for example. The whole tension of his relationship with Mrs Gale. Steed's last meal. Mrs Gale's judo scene. This doesn't quite make it into my stonking good television category but it's still vintage Avengers.
------------------
60s TV The Avengers