The Professionals: A Hiding to Nothing 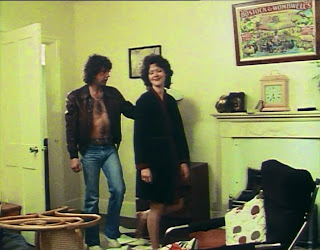 I knew this would happen. I have a strange knack of falling on my feet. Within a week the house is on the market, all the necessary surveys have been done, I've appointed a solicitor, I've found a halfway-decent-looking flat (& even if it turns out not to be it's not forever) at a rent I'm prepared to pay in a halfway-decent area of the city, I've paid a retainer, the lettings agency are checking me out. When I get the bit between my teeth I'm like a little terrier. So I can afford to put my feet up in front of the fire (British Gas think I'm going to pay them £1000 to heat this house this winter, but I've got news for them) & watch some cult TV.
I see I have only posted on The Professionals once. This is a state of affairs which clearly needs to be addressed. I *just* remember watching on episode - the one with the creepy dummies - with my dad. In fact I'm not convinced it would necessarily qualify as 'cult' TV in most people's book - that is unless you define it as I do, whatever I take a shine to. I like to approach The Professionals as a headlong rush down memory lane, about as far as my memory will take me, to the 1970s. The hair is long, the trousers are flared, the shirts are open to show hairy chests, the men have unreconstructed attitudes, Cowley is an old-school boss, the cars are the sort of cars I salivated over in my youth. The Professionals is a time capsule, more than anything else, for me personally.
The episode I'm writing about gives a prominent role as detective & lover to Martin Shaw. I'm astonished to discover that he's a proponent of vegetarianism, but then Lewis Collins's personality was always closer to that of his on-screen character. It also took me a while to connect this Martin Shaw with the one who played Dalgliesh: interestingly versatile, & also interesting how a man can change. I literally didn't connect the two Martin Shaws.
This one begins with a wonderful display of the now-outmoded communications & video technology of the time, followed by a scene in one of the underpasses of the time, to add an aura of gritty reality. Interestingly, the glimpse of mews houses before the shoot-out in the underpass clearly places the location of this in Avengerland, which mixes my two types of TV: unreal & real. I love that this scene takes place in an underpass: even in big bad Birmingham, which was notorious for them, they're hard to come by nowadays, although they were everywhere at the time of this show.
This episode is also an interesting showcase of CI5's more sophisticated detecting. It involves an element of acting & duplicity in pursuit of a worthy cause. I think this episode would have been improved by not explaining this in so much detail to the viewer so early, so that we would have been forced to deal with the moral issues without knowing the justification.
It also more or less separates Bodie & Doyle for the earlier part of the show. Their normal chemistry was dependent on the simple fact that in reality they didn't get on. Interestingly they are seen more as individual personalities here: Bodie as the colder hunter, Doyle as the lover. Further moral issues are raised by the way they seem to 'use' the female characters, but the whole point of this episode is that those exact same tactics are being used by the other side as well.
Altogether a tautly-plotted Professionals episode, relying heavily on individual characterisation of Bodie & Doyle, & on the moral issues involved in their work. The only improvement would be to have played up those issues a bit.
------------------
70s TV The Professionals